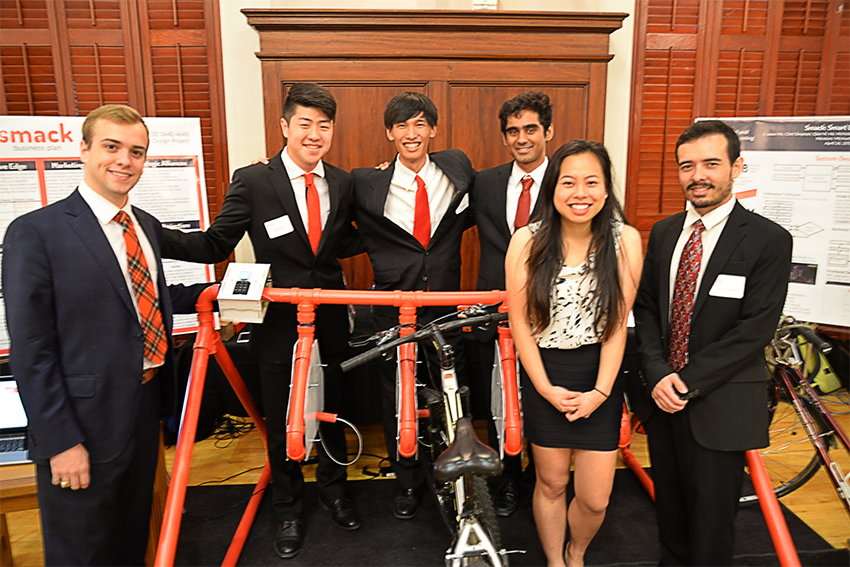 Smack, a startup created by UT electrical and computer engineering seniors, hopes to improve bike security on campus and beyond.

Created as part of a project in the entrepreneurial part of the group’s senior design capstone course, Smack is a smart bike rack that protects bike theft. The group presented the startup last Wednesday to the public and faculty.

Nick Sehy, chief financial officer of Smack, said the group was inspired by the lack of bike security on campus and the widespread biking culture in Austin.

“I participated in Texas 4000 where you’re given a $1,500 bike for free so you can ride it to Alaska,” Sehy said. “I didn’t want to lose this important bike on campus, because you hear a lot of horror stories about people losing their bikes.”

“The big thing (in the class) is inspiring design,” McDermott said. “Coming up with ideas that solve a problem are good. That’s what engineers should be doing.”

Sehy said people use Smack by reserving a space for their bike and setting an individual PIN to unlock a specific slot in a specific bike rack, providing each user with personalized security. Sehy said Smack is helpful because it incorporates locks into the bike rack. He said a hefty lock that might cost upwards of $60 is inconvenient and financially difficult for students.

“The smart bike rack embeds locks in the rack itself, so you don’t have to carry a lock,” Smack CEO Jason He said. “Built-in Wi-Fi allows you to reserve a slot before you bike to class.”

The Wi-Fi and electrical component allows the rack to monitor its cables and send alerts when someone tries to tamper with them. Smack Vice President of Engineering Clint Simpson said the internet capability of the rack creates potential for additional features.

“You can make it so users can pick a favorite rack or save their PIN number so they don’t have to enter it every time,” Simpson said.

A survey taken at the showcase demonstrated that 56 percent of people who don’t bike say they don’t because of a fear of theft or not knowing where to park.

“If a city is truly trying to encourage cyclists on the road, then they should take the next step in providing security for the bicyclists,” said Smack Vice President of Operations Qian He. “It also promotes a healthy environment because it encourages bikers and has solar panel-powering capability.”

Hardware development specialist Ted Mao said Smack also saves money in the long run because it would reduce the cost of bike thefts, both for bike owners and the police.

The group hopes to pass Smack along to a group in the next entrepreneurship class so that it may be implemented on campus in the coming years, especially since the price of the smart bike racks are competitive with current traditional racks, according to He.

“The challenge was realizing that when you do a project in the real world, no classroom can teach or prepare you to understand how things are to be done,” said Akshans Verma, Smack’s Director of Web Interface Development. “There were days when we didn’t even know how to move forward, so seeing every piece come together and going to the open house and seeing the finished product was
so rewarding.”