Pierce faces pressure as Longhorns prepare to face No. 9 TCU 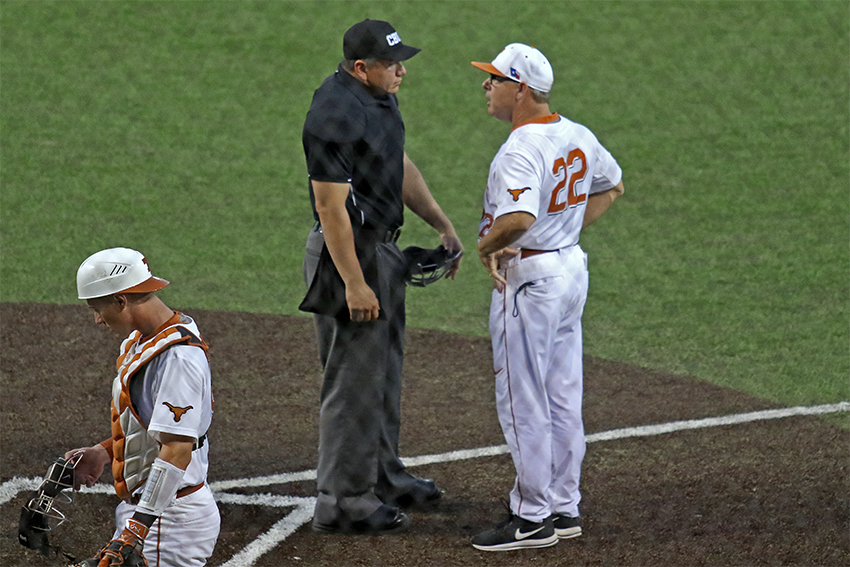 Head coach David Pierce knew exactly what his expectations were going into his first year on the 40 Acres.

They’re the same as the rest of the Longhorn athletic program: win, or face the consequences. Former Texas head coach Charlie Strong saw exactly what those consequences were when he packed his bags after another 5–7 season, ending his nightmarish three-year Longhorn campaign.

Pierce knew this, and his ballclub did, too.

“As we all know, the expectations at the University of Texas adds that little pressure,” Pierce said before his Longhorn debut in January. “You feel like you have to do something different. I’m just trying to constantly get them to trust who they are … We’re looking for their confidence to get them to relax.”

Pierce said from day one that he wanted his team to be not only confident, but also level-headed, which isn’t an easy feat when dealing with a young team.

In fact, two-and-a-half months later, and that’s still a primary focus for his ballclub, especially with a three-game series against No. 9 TCU (32–11, 12–6 Big 12) this weekend. But Pierce believes his young team will be able to deliver a strong performance against the Horned Frogs once they learn to calm their nerves in the foreign environment at Forth Worth.

“I think we’re going to have to work on keeping their emotions intact,” Pierce said. “They’re playing great baseball right now, but they’re just so excited to keep going. Anytime you get the chance to play the team that’s leading your league, it’s challenging and it’s exciting so I think we’re just going to have to be business as usual in the next couple of days and get ourselves prepared.”

The Horned Frogs are coming off by far their worst loss of the season last Sunday when No. 6 Texas Tech dominated them, 21-3. But Pierce doesn’t expect that to give the Longhorns an advantage when they face TCU this weekend.

“What happened to them at Texas Tech won’t have any bearing to this series,” Pierce said. “They have veteran guys. They’ve been in post seasons, so there’s a lot of concerns, but it’s not really about TCU. It’s much more about our players and going out and being themselves.”

Pierce will feel the pressure from the expectations that come with coaching for Texas to the fullest extent when the No. 24 Longhorns (31–16, 9–8 Big 12) face the conference-leading Horned Frogs this weekend. But Pierce fully accepts the challenge and will find comfort in his team’s eagerness to deliver a strong performance at Fort Worth in order be ready for everything the postseason has to offer for the Longhorns.

“When you look at the way our kids are responding and them starting to understand the big picture a little better — of what May and June potentially brings to this team — I think that’s something that they’re looking forward to and that’s something I’m glad that they’re excited about,” Pierce said.