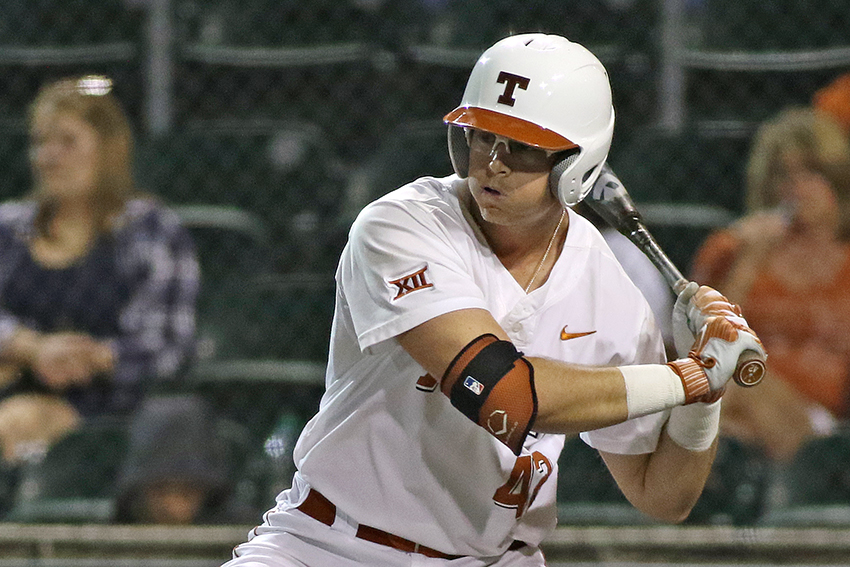 Senior Kacy Clemens choked back tears as he hugged his brother, sophomore Kody Clemens in the dugout before his final game on the 40 Acres. But it’s what Kacy did in his first appearance at the plate Sunday afternoon that had the Longhorn crowd on their feet early in a 9-4 victory over West Virginia.

Clemens stepped up to the plate with bases loaded and no outs in the first inning, and he did what he’s done all year: delivered. Clemens settled into the box and sent the first pitch soaring over the left field wall for a Senior Day grand slam to give Texas the early 4-0 lead.

“I just got a pitch I could handle and I could not believe it went out,” Clemens said. “It was a really special moment. I had all my family here, you couldn’t have wrote it any better. It’s like some movie material right there.”

The crowd at UFCU Disch-Falk Field erupted as Clemens rounded the bases. The first baseman said his brother Kody hugged him again and said “never a doubt” when he returned to the dugout as the crowd chanted his name.

“Everything was just so surreal,” Clemens said. “I went to sit down because I couldn’t believe it all had happened. It was the first pitch I saw. I got to the dugout and I was like ‘did that really just happen?’”

However, Clemens wasn’t the only senior who put on a show. Senior center fielder Zane Gurwitz delivered two timely doubles in his three-RBI performance to close the door on any hopes West Virginia had of any late-game miracles.

“This was a great win, a great series win,” head coach David Pierce said. “It was unbelievable to watch our seniors go out the way they did… it was just an incredible weekend to win a big series when we had to…the seniors had so much emotion the entire week. For them to go out and play well was important for them.”

Emotions ran high as Longhorn seniors sang ‘The Eyes of Texas’ for the last time in front of their home crowd at UFCU Disch-Falk Field following the 9-4 Senior Day victory.

“Every senior tells you ‘hey they go by fast,’” Clemens said. “But you don’t really realize how fast it is until you’re in their shoes. It’s just such a blessing.”

Clemens was all smiles following his final game at UFCU Disch-Falk Field, as kids bombarded him begging for autographs. But Sunday’s win wasn’t just a Senior Day victory.

The Longhorns’ series win over West Virginia moves them up to the No. 6 slot for the Big 12 Tournament. The victory Sunday sets them up for a first round matchup with third-seeded Oklahoma rather than second-seeded TCU, who swept the Longhorns earlier this year.

The Longhorns victory in their regular season finale caps off a 34-20 overall record (11-12 Big 12) in Pierce’s first year at Texas. Now, the Longhorns are set for a first round matchup with the Sooners (34-20, 12-11 Big 12) at 7:30 p.m. Wednesday at Chickasaw Bricktown Ballpark in Oklahoma City.

Although the Longhorns are likely to get a bid to the NCAA Regional Tournament following the conference tournament, they still feel like they have something to prove.