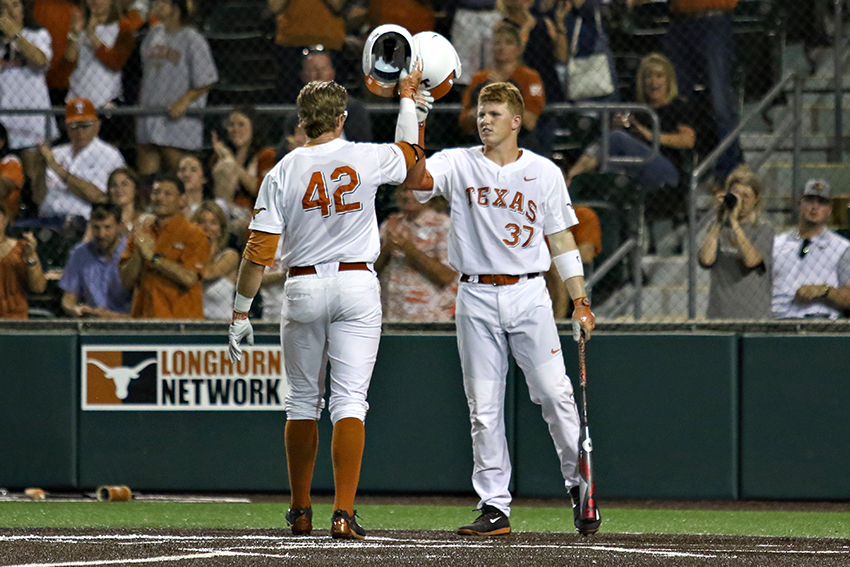 Two innings before Texas sealed its 5-3 12-inning victory over top-seeded Long Beach State on Saturday night, the Longhorns appeared to be the victims of a game-winning inside-the-park home run. Texas freshman left fielder Austin Todd failed to corral a two-out line drive in the bottom of the 10th, and his error caused the ball to trickle onto to the warning track. With the game-winning run rounding third base and steaming toward home plate, Todd didn’t have many options but to desperately fling the ball as far as his arm allowed.

The ball sailed over the head of freshman shortstop David Hamilton and bounced right in front of Texas third baseman Ryan Reynolds. There wasn’t enough time to field the ball with his glove, so Reynolds opted instead for the barehanded grab before firing to the plate. Long Beach faithfuls manically waved their arms in hopes of a safe call as the runner approached the plate, but junior catcher Michael Cantu put the tag down just in time. The once-raucous crowd at Blair Field became mired in disbelief, and the game continued on to the 11th.

“Well Austin (Todd) had to miss (the ball) in left for it to happen,” head coach David Pierce said. “But when you talk about having a clock in your head and not being passive and going for plays, that was just a perfect example of Ryan being in a position and not being afraid to make a play, and he had to make it to keep the play moving. SportsCenter Top 10 right there.”

Reynold’s heroics extended the extra-innings affair between Texas and Long Beach, a heavyweight battle between two teams with College World Series aspirations. Two innings later, junior designated hitter Travis Jones delivered the knockout punch. A two-out, two RBI single to left proved to be too much for the Dirtbags, and Texas took the contest 5-3.

“I’ve been doing this for about 30 years now and that is by far the best ballgame I’ve ever been a part of, and I’ve been a part of a lot of great baseball games,” Pierce said. “Both teams laid it on the line, both teams pitched and played great defense, and I’m just really proud of our fight.”

Every time Texas fell behind Saturday night, it had an answer. Before extras, all three of Texas’ runs came via solo homers. Redshirt junior Bret Boswell launched two solo shots, one to left in the second frame and one to right in the seventh to knot the game at 2-2. Then, with Texas trailing 3-2 in the eighth inning, senior center fielder Zane Gurwitz blasted another dinger to tie it up.

The Longhorns struggled in one-run games throughout the season, going 8–15 entering Regionals. But with Saturday’s victory and a 3-2 win over UCLA on Friday night, the Longhorns have proven their mettle in tight contests. Now, a Regional Final awaits, with a trip to the Super Regionals possibly on the horizon.