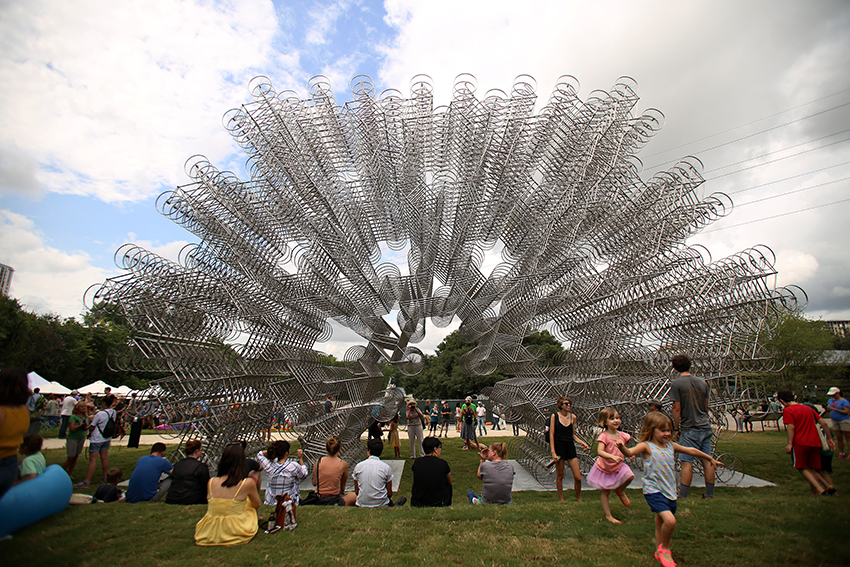 Hundreds of silver bicycles glisten in the sun near the Waller Creek boathouse on Lady Bird Lake. The bikes do not belong to the thousands of cyclists who frequent the Hike and Bike trail every day, though – they’re part of a massive sculpture by Chinese artist Ai Weiwei.

Last Saturday, a substantial crowd gathered at the mouth of Waller Creek for a public opening of Forever Bicycles (2014), a towering amassment of over 1,200 bicycles that will be on public display for the next eighteen months as part of the Contemporary Austin’s Museum Without Walls program. Another sculpture by the artist, Iron Tree Trunk (2015), also opened to the public on Saturday and is on display at the Betty and Edward Marcus Sculpture Park at Laguna Gloria in northwest Austin.

“Waller Creek, the Hike and Bike trail, and Laguna Gloria are all public spaces where all different kinds of people can come together, be active and enjoy natural beauty and enjoy art,” said Andrea Mellard, Director of Public Programs and Community Engagement for the Contemporary Austin. “It seemed like a perfect fit to bring Forever Bicycles here to the Hike and Bike trail and to Waller Creek.”

In addition to his prolific artistic career, Ai is also a vocal  human rights advocate. He has made twenty documentaries addressing a variety of human rights and political issues, the most recent of which, Human Flow, was made after he and his team traveled to refugee camps in 22 countries to shed light on the global refugee crisis.

“I think it’s an interesting statement to make [to have his art in Austin],” said Justin Tam, a UT alumnus who attended the opening. “The message is that they appreciate what he’s doing, they appreciate the humanitarianism.”

The transformation of ordinary objects into larger than life works of art is a common thread throughout Ai’s work. Forever Bicycles was created by combining bicycles made by the highly popular Shanghai-based bicycle brand Forever (Yongjiu) into orderly, extended patterns. The work is assembled into a slightly different formation in every new city it is shown.

When Ai was four years old, he and his family were exiled from their home in Beijing to labor camps after his father, Ai Qing, an acclaimed Chinese poet, was targeted by the Anti-Rightist movement.

“When he was a young man in China, he really wanted one of those bicycles because it symbolized movement, mobility and freedom, which were all things that he wanted more of in a repressive culture,” Mellard said.

Yamin Li, UT alumna and the exhibit specialist at the Asian American Resource Center, attended the opening and discussed the importance of the bicycle as a means of transportation in China.

“Growing up in China, (the bike) was our main transportation in my family,” Li said. “You have to have a bike in China to go to work, to go anywhere. It’s not considered extra, it’s considered a must.”

John Morris, Li’s husband, also in attendance at the opening, studied Chinese language and culture at UT and said the  bicycle played a significant role in China’s cultural history.

“After the Communist revolution, Mao said that socialism would be so great for China that everybody would be wealthy, and that every family would have a radio and bicycle,” Morris said. “[The bicycle] was a mark of wealth.”

Although Ai wasn’t present at the event, Mellard hopes that he will visit the city in the fall for Austin’s first-ever Chinese film festival, a collaboration between the Contemporary Austin and the Austin Film Society that Ai will help program.

“The festival will take place sometime between October and November, (so) we are hoping that we can get him here around then,” she said.