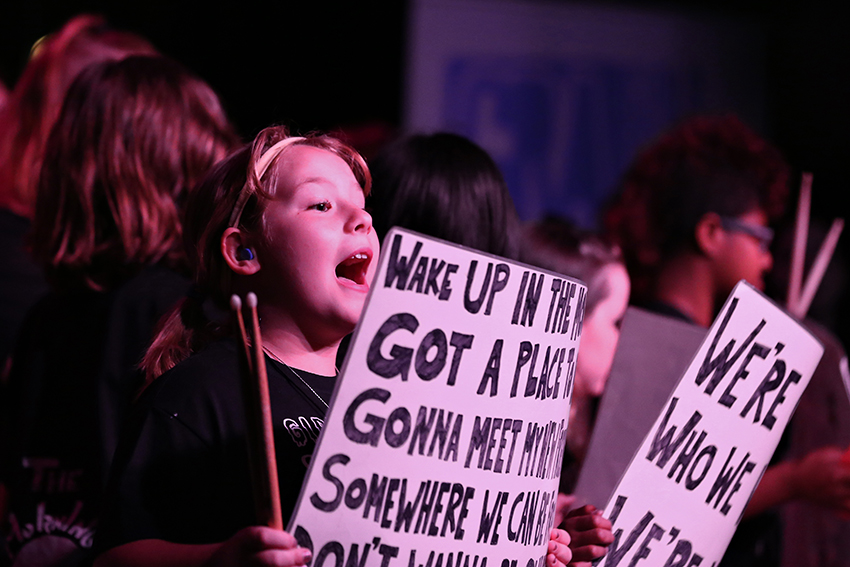 One week ago, middle and high school-aged girls were cooped up in classrooms all across the city, eagerly watching the seconds hand on the clock tick down to summer. Now, under the radiating warmth of magenta stage lights and the expectant gaze of an audience of strangers, one of those girls steps forward and confidently wraps her hands around the mic in front of her.

“Are you ready to melt some faces?” she yells.

Last Saturday, Girls Rock Austin, a nonprofit organization that works to empower girls through music and performance, hosted its third annual musical showcase at the North Door music venue. The performance was a culmination of a weeklong summer day camp for girls, genderfluid, non-binary and trans youth ages 8–17 in which campers form their own bands and write original songs.The Austin organization, which was founded in 2007, is part of a larger network of over 100 Girls Rock Camps across the world.

For executive director Erica Flores, the goal of the camp isn’t to write a perfect song but to promote self-efficacy.

“Half of the kids who come have never touched an instrument before,” Flores said. “The band can look whatever the girls want it to look like.”

In addition to learning how to play an instrument and writing songs, campers participate in workshops focused on technology and spend time discussing social justice issues, such as intersectionality and identity politics.

“Everything in the media, especially the representation of women, all of those things are very real and have a very real impact,” Flores said. “It’s important that we carve out a space to discuss these issues and be very deliberate about the curriculum we create.”

For former Girls Rock camper Natalie Shea, it was all about the music. The UT alumna and her Girls Rock band members decided to keep their band alive after the week ended in the summer of 2009. Three years later, the band, Schmillion, was still together, opening for Arcade Fire and playing shows at South by Southwest, among other impressive accomplishments.

“I didn’t go into the camp with the intention of forming a band,” Shea said in a phone interview. “I had never written music with people before, (but) it just felt really easy.”

She credits the camp counselors in part to the band’s early success.

“I think we skipped the first part of what being a band is,” Shea said.

“These women knew all the aspects that you need to know about being in the band, and they knew how to use all of this really cool equipment, too,” Shea said.

Flores said it was important the camp counselors and volunteers be diverse.

“I want the girls to see someone who they can identify with, which is why our volunteers have diverse interests, looks, abilities, and teaching styles,” Flores said.

Although Schmillion eventually broke up, Shea said the camp’s impact on her goes beyond the band’s success.

“I made some of my best friends (at the camp),” Shea said. Shea also kept in touch with the camp counselors, whom she describes as a badass group of women.

First-time Girls Rock camper Zazie Bryant, 14, said the camp counselors and volunteers made it a point to include everyone.

“They’re all really supportive, especially if you’re shy,” Bryant said. “They’ll make sure that you’re having a good time.”

At the start of a final rehearsal the Friday afternoon before the showcase, an energetic camper set the tone with one mighty line:

“Boys can rock, girls can too! You gave us a chance, and we showed you!”