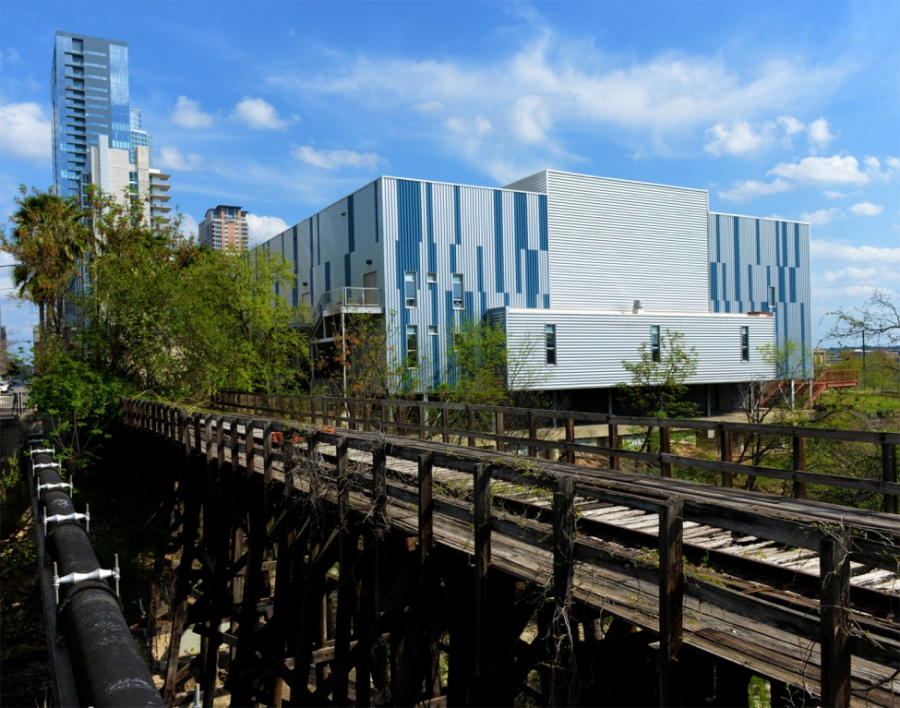 Few places in Austin warm my heart quite like Shoal Creek (save Hole in the Wall). Along the ebb of Austin’s original western boundary lies a cultural treasure trove, a comforting complement to its renowned tranquility. The creek traces its way downtown towards the last remaining vestige of the Union Pacific Railroad in the city: the West 3rd Street trestle.

Spanning 150 feet above the creek and stretching past both creeksides, the current iteration of the rail dates all the way back to 1925. The trading corridor has itself been active for centuries, due in equal parts to its geography and its quiet beauty. Under the track the river dips anticipating the Colorado River. The wooden pillars and rusted tracks— overgrown but still standing— wait patiently for Austin’s next move.

This is an important idea to Ted Eubanks, an executive board member of the Historic Bridges Committee in Austin. “The possibilities are captivating…there’s nothing in Austin like it,” mused Eubanks during my chat with him. He recalls a time close to his childhood when “they hauled crates of spinach by the ton” on the rail, a relic of Austin’s once-booming spinach industry. Timber and automobile parts also made regular appearances on the post-war boxcars.

Recent efforts to convert the upper portion of the trestle have been fruitless, as the City of Austin deemed the supports unsound last year. But the trestle is not beyond repair; this century-old story should not end in disrepair and obscurity.  Unearthing a structure so rich in history as the trestle encourages an understanding of Austin’s past.

The Historic Bridges Committee in Austin points to the ideal future of the 3rd Street trestle in a project akin to the 2009 restoration of New York City’s High Line. In its first five years, the railroad-turned-park supported a whopping 20 million people. A fraction of that number visiting our trestle could provide tourists in Texas a creekside destination worth remembering. The update would include pedestrian outcroppings lined with plants and a historical marker commemorating the site.

Austin already boasts the outdoor sanctuaries of Zilker, Barton, and Burnell, but lacks environmentally downtown. An accessible lunch break alternative to its neighboring Lady Bird Lake Trail, Shoal Creek makes up in serenity what it lacks in grandeur. Austinites who live or work downtown deserve a respite from the buzz of Lamar, and the 3rd Street trestle is just what the doctor ordered.

In fact, urban area residents face significantly higher rates of neurological damage, especially those with infrequent relief from city life. Developing an outdoor landmark near downtown Austin encourages mental and physical exertion, either through a jog along the Shoal Creek Trail or a quick stroll atop a beautiful bridge. Outdoor exercise in the city is more than just healthy–it’s helpful. Park building initiatives in urban areas reflected decreased depression rates in a 2014 study from The Journal of Mental Health Policy and Economics. UT students' proximity to the trestle also could soothe troubled minds for those at an age replete with mental ailments.

Nature is not just important for those who seek it out—it benefits the passerby as much as the passionate. If downtown has you down, a remodeled 3rd Street trestle would brighten your day. For more info on how to get involved in the preservation and rehabilitation of the 3rd Street Trestle and Austin’s other historic bridges, visit http://www.txdot.gov/inside-txdot/division/environmental/historic-bridge.html or call 512-974-1150 and encourage the Austin Department of Transportation to restore the Live Music Capital’s top non-musical track.

Greer is a government sophomore from Houston.