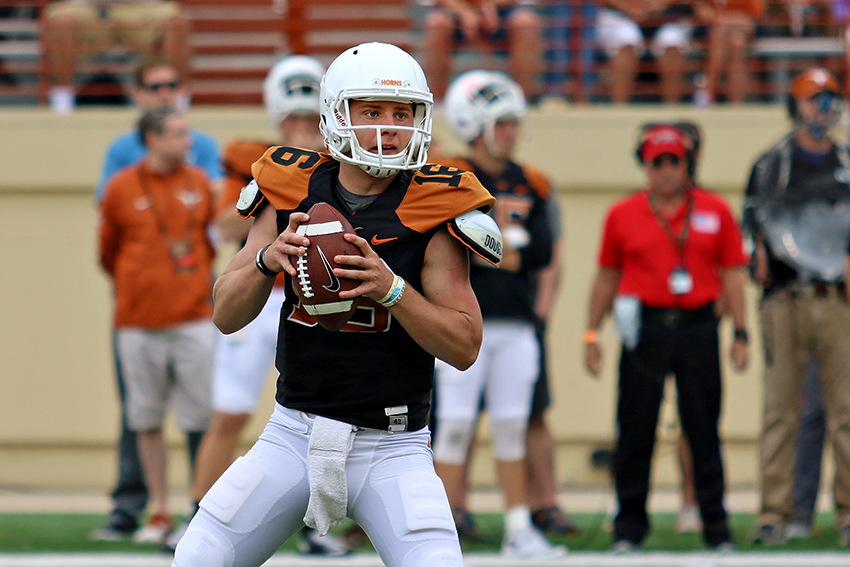 Tom Herman doesn’t jump the gun when it comes to making decisions. That was clear in April when he refused to name Shane Buechele as Texas’ starting quarterback.

“I think a healthy fear of losing your job is just that: healthy,” Herman said, even after Buechele threw for two touchdowns and rushed for one in his 369-yard performance in the Orange-White game on April 15.

Although the entire state of Texas is expecting Buechele to lead the offense in Texas’ season opener against Maryland on Sept. 2, the message was received.

Sophomore Collin Johnson is big time. The six-foot-six receiver came onto the scene late last year, and after Johnson’s two touchdown, 117-yard performance in the Orange-White game, be on the lookout for a healthy dose of No. 9 as the Longhorns’ No. 1 receiver.

However, nothing else seems to be set. It wouldn’t be a surprise if former junior quarterback Jerrod Heard and sophomore Devin Duvernay earned their spot with Johnson. But with the depth Texas has at this position, expect an intriguing battle as sophomore Lil’Jordan Humphrey, junior John Burt and seniors Armanti Foreman and Dorian Leonard fight for their spot throughout
the summer.

Can the Longhorns end their secondary woes?

It’s no secret. Texas’ defensive backs got exposed with the long ball and missed tackles nearly every Saturday. But things shouldn’t be as bad this year. Former top recruit Brandon Jones showed promise in his freshman year, and along with juniors DeShon Elliott and John Bonney, the safety spot will bring some much needed stability.

Junior P.J. Locke III appears to have earned his starting spot at nickel, but the rest is up for grabs. Look for juniors Kris Boyd, Davante Davis and Holton Hill to fight for their spot come September.

Any unanswered questions the Longhorn faithful have will be answered by week three. A trip to Los Angeles for a matchup with USC will provide the Texas secondary with one of its biggest challenges of the season. Heisman candidate and Trojan quarterback Sam Darnold is poised for a standout season, but can the Longhorn secondary show resilience in Southern California?

Who will accompany Jefferson & Hager at linebacker?

Texas’ defensive coordinator Todd Orlando and Herman shifted junior Malik Jefferson from inside linebacker to his original position on the outside, which shifted junior Breckyn Hager — who led the team in tackles for loss (13.5) and sacks (6.0) last year — to the middle. Experienced juniors Anthony Wheeler and Edwin Freeman will likely share time for the final linebacking spot, and  junior transfer Gary Johnson will put up a fight as well.

It’s been a decade since a tight end has made significant contributions for the Longhorns, but the wait now looks to be over. Senior Andrew Beck will enter with experience at the position, with two freshmen, Cade Brewer and Reese Leitao, capable of earning the spot.

Herman’s use of a tight end might take some getting used to, but look for one of these players to bring this forgotten position back to the 40 Acres.