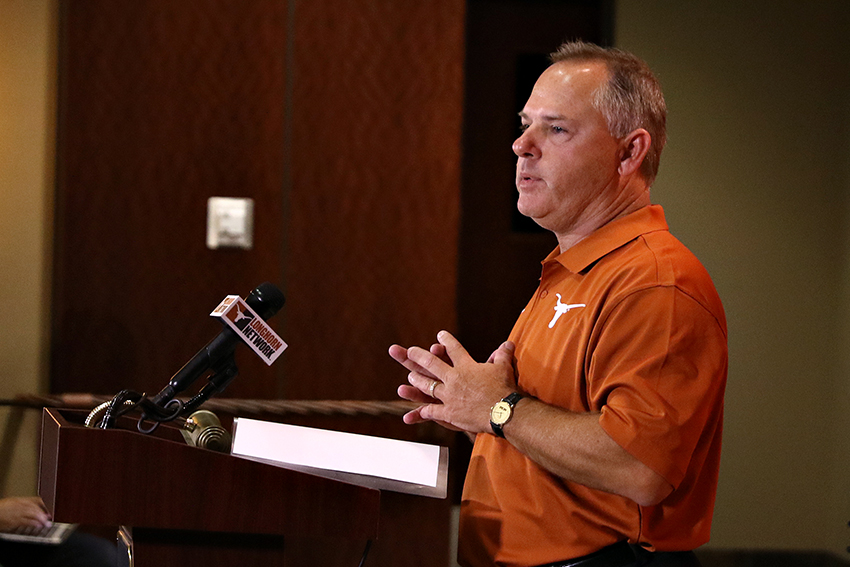 Ever since he entered the college baseball scene as an assistant coach at Rice University in 1991, coaching at the University of Texas has always been David Pierce’s dream. Now, 26 years later, that dream has become a reality after Pierce’s first season with the burnt orange in 2017.

The former Tulane skipper improved Texas’ record by 14 wins last year compared to 2016, displaying a marked improvement from the final season of the Augie Garrido era. Now, with Texas’ 2017 campaign in the rearview mirror, Pierce took some time to sit down and reflect on his first season in the Longhorn clubhouse.

Q: Take me through the moment you found out you got the job.

A: Well, I was actually in Los Angeles coaching the USA team, and I was in a hotel room by myself at five a.m. in the morning when I got a text from Mike Perrin that said “President Fenves has approved your appointment, welcome aboard.” It was elation, it was excitement, it was anticipation, it was all positive.

Q: Did you ever feel pressure from the demanding expectations at Texas?

A: The University of Texas can’t put any more pressure on me than I put on myself. It doesn’t matter if I was coaching one of the high school teams I coached at or any other college that I was at. For me, our preparation and the way we went about our business is the same at Texas as it has been anywhere. I like the expectations. I’ve never felt pressure, but you always want to perform your best and have your players go out and play freely and be the best they can be. I thought we accomplished a lot of that this year.

Q: Before the program’s 11 drafted players made their decision to leave Texas and pursue a professional career, did you tell them anything?

A: We had individual meetings with most of the players. My biggest message to them was make sure you make a good business decision. You’re at a university that cares about you in such a traditional place that you can be a part of this history, so make sure it makes sense for you to advance onto professional baseball.

Q: With none of the players who were drafted returning, what does that mean for next year’s roster?

A: It does put a little damper in some pitching when you look at our redshirt sophomores who were eligible that ended up signing a contract and potentially a couple of outfielders that were expected to come back. In the big picture it’s a part of our industry and we just have to deal with it.

Q: What is your message to Longhorn fans going into next season?

A: First of all, thanks for the support that they gave us throughout season — at home and on the road… You’re going to continue to see a team that improves. I feel like we’re going to improve our team speed as well as our offensive approach and we’re going to have some guys step up in pitching roles immediately. I think you’re going to see a better, exciting team and hopefully a little more polished team.