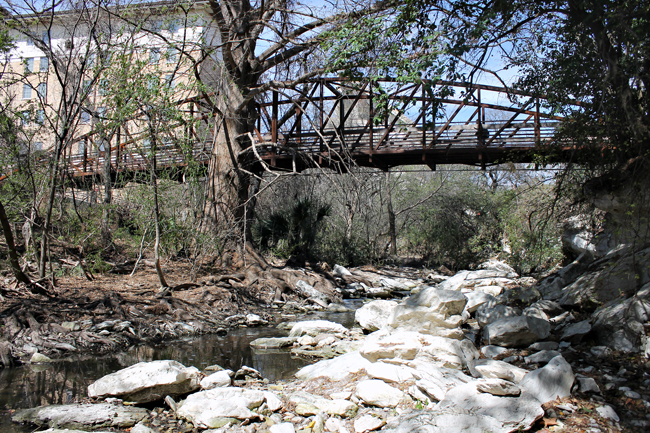 The bridge by San Jacinto dorm is a example of the 2013 master plan’s hope to feature Waller Creek more around the university and downtown. Many renovations, such as new bike trails and a possibly rail line, will take place in the next 20-30 years. " />

The bridge by San Jacinto dorm is a example of the 2013 master plan’s hope to feature Waller Creek more around the university and downtown. Many renovations, such as new bike trails and a possibly rail line, will take place in the next 20-30 years.

Waller Creek, one of our campus landmarks, is ecologically suffering and has outdated infrastructure. The 2012 master plan and more recent landscape plan have prompted increased attention to improving the creek but only the first few steps have been taken. Since the University of Texas strives to be a top tier research university, improvements to not only its infrastructure but its environmental resources need to be prioritized to make the university not just nationally ranked, but also a positive experience for Longhorns who spend four years on the 40 acres.

Waller Creek currently has areas where its E. coli levels are two to ten times higher than the amount considered safe by the EPA for human contact according to Dr. Stuart Reichler, a UT program administrator and senior lecturer. He is helping to lead a team of publicly and university funded research to test E. coli levels in the creek. Whether the high E. coli levels is from leaking human infrastructure or naturally occurring animal waste is still unknown.

“The UT campus dominates Waller Creek, or at least the vast majority of it,” Tschirhart said. “We are working with environmental health and safety and the office of sustainability to provide them with data to ensure that UT is not having a negative impact on the creek itself.”

Beyond the issue of high E. coli, the creek still faces many ecological issues throughout campus, such as invasive species, according to Allan Shearer, UT professor and member of the Waller Creek framework committee. This is common in urban creeks but it is still detrimental since it causes the overgrowth of undesired plants in the area.

The vision for an ecologically healthy creek has yet to be realized as the only action to improve the creek thus far has been to clear away brush and some poison ivy in the area. While this has increased visibility of the creek area, there is still the need for better infrastructure and clean water since it is unsafe for students to hike or swim in the creek area.

The Waller Creek framework committee Shearer is working on aims to redesign the area around Waller Creek which incorporates the natural feature of the creek with the campus. They hope to see Waller Creek as the new central point of campus, what Shearer called an “emerald belt” that runs in the middle of campus.

“This is a chance to think about what nature in the city is in the 21st century,” Shearer said. “Very few schools have the opportunity to have a creek running through campus. If you have a creek going through your campus you can put (the creek) in a tunnel and make it go away or recognize the idea that environment matters.”

The University, by funding the Waller Creek framework committee and research, show they think the environment does matter. But creek improvements have no time table and will probably not be finished for another 10 or 20 years, leaving the campus a little less green for its current Longhorns and leaving them at a loss for the natural beauty Austin is known for.

Hodge is a Neuroscience sophomore from Austin.