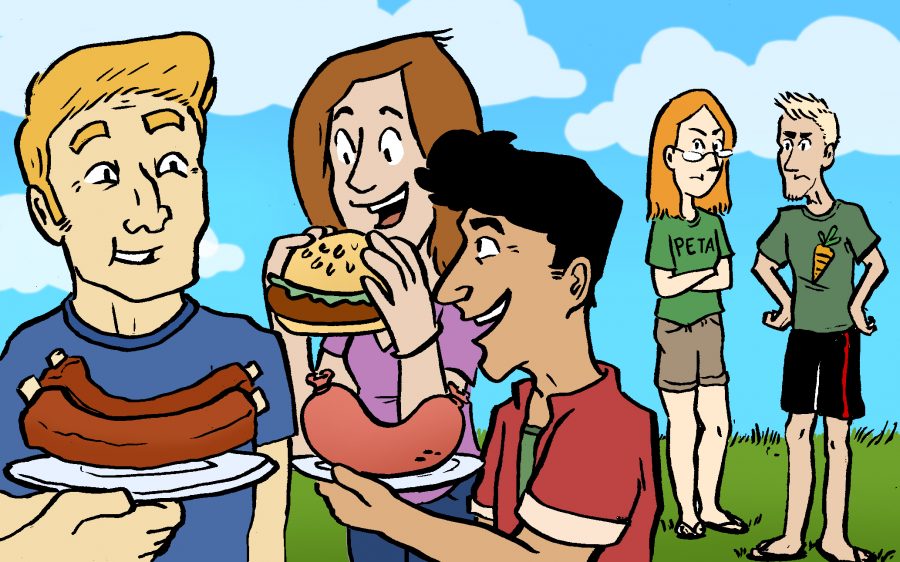 Ideally, veganism would only be about saving animals, but recently, it seems to be more about shaming non-vegans. Vegans used to share videos on social media showing the cruel treatment of animals before they were killed for their meat — convincing many meat-eaters to go vegan if they loved animals. But now, social media is full of videos that call non-vegans stupid, idiotic and inhumane people who deserve to die, which is topped by playing extreme pranks on them — convincing no one and rather causing friction amongst people.

Recently, People for the Ethical Treatment of Animals (PETA), pranked people by introducing them to a new brand of milk. After people had tried the milk, PETA staff falsely told them that it was dog’s milk. In reality, it was soy milk. Naturally, people were disgusted.

Their goal was to show that non-vegans are hypocrites. PETA may or may not have achieved that, but what they certainly accomplished was making themselves look like bigots. By doing this sort of prank they garner nothing but hate from people. Only vegans are laughing at non-vegans, and I doubt that non-vegans, after watching such a video would say, “I think they are right, I am stupid, and I should go vegan.”

Many people are animal lovers but still eat meat or drink milk. They are consuming food that is cheaply and widely available in the market — choosing a non-vegan lifestyle that they have had almost since birth. In America, over 45 million people are below the poverty line, and over 97 million more have low incomes, making up 48 percent of the population; additionally, so many people have no time to think twice before putting something in their mouths as they are busy building a better future for themselves and their family (or just graduating from college). Turning vegan is a very difficult option for them. Eating meat and drinking milk is a survival skill, just not in the kind of stranded, wild setting that we usually imagine.

A visit to big stores such as Walmart or HEB would tell you that cow’s milk is cheaper than soy or almond milk, there are very few vegan protein options compared to meat options  and there are little to no ready-made or almost cooked vegan options in many stores. It is also extremely difficult to find something vegetarian in restaurants, let alone vegan.

Unfortunately, above-the-poverty-line vegans often fail to realize that not everyone is as lucky as they are. Not everybody can shop at Whole Foods or go to fancy restaurants. Vegans must stop shaming non-vegans, and such cases should be treated as socially unacceptable harassment. These shaming practices by vegans accomplish nothing besides driving people even further apart.

We are only talking about America here — many other countries that are doing much worse financially would laugh at going vegan and may not even be disgusted by dog’s milk as they tend to consume whatever is available — even dog’s meat. Try that prank in rural Indonesia, or even a homeless person in America who has had nothing to eat in a few days  — I doubt they'll be in the mood to go vegan.

Vegans might be right to promote veganism, but forcing others into following their lifestyle is not right — and it is not their right. If they really want a change, help the society grow so that people have the time and the money to choose veganism. Even after that, veganism is a choice, and nobody should be forced into changing their lifestyle — that would make it more like an intolerant religion — and we don’t like that.

Batra is a computer science and rhetoric and writing junior from New Delhi, India. Follow her on Twitter @ratnikabatra.