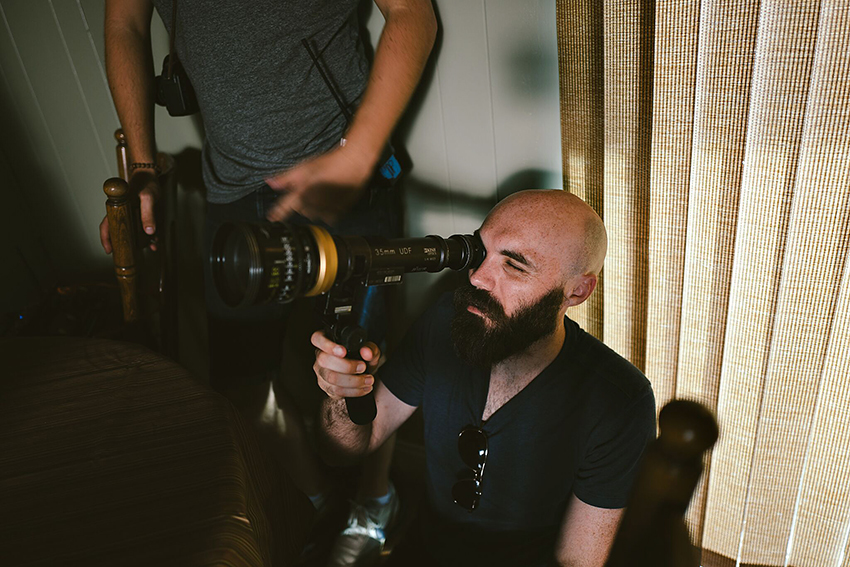 Courtesy of Allied IM and A24

Texas director David Lowery surprised filmgoers last year with the brilliant “Pete’s Dragon,” a family-friendly reimagining of Disney’s 1977 hybrid live-action animated film. His newest film, “A Ghost Story,” could not be a more different moviegoing experience. The Daily Texan spoke with Lowery to discuss his critically acclaimed meditation on grief, time and the meaning of life.

The Daily Texan: You’re from Irving, Texas, where you shot "A Ghost Story.” How did that come about?

David Lowery: It was circumstance. It was a twist of fate. We were looking for houses all over DFW, and we were just trying to find houses that were either condemned or slated for demolition so that we could have the run of it, and we just so happened to find the perfect one in Irving. This was exactly what I was looking for — one that looked like the house that I'd moved out of two years earlier, when I went to make "Pete's Dragon." It was an old, rustic Texas house that felt vaguely rural but still was in the middle of the city.

DT: When did you first have the idea for “A Ghost Story”?

DL: I think it was February or March of 2016. I remember being here in Austin for South by Southwest in March of 2016 and telling a couple folks here that I was gonna make a movie and I needed them to work on it.

DT: How did the script evolve over time?

DL: It was so fast that it didn't have that much room to evolve. The first draft was 10 pages, and I wrote it in day. By the next week it was 30 pages, and that's pretty much what we shot and what you see on the screen. Once Casey (Affleck) and Rooney (Mara) got to town and we started shooting with them, I realized we should probably shoot more with them that isn't in the script. So we added a bunch of scenes and I wrote some more material and we shot that with them, but it didn't change that much.

DT: There is a lot of the film that is wordless, did you plan that out in detail or is that something that you figured out?

DL: That’s why the script was almost 30 pages; there's almost no dialogue in the movie. I love quiet movies, movies without dialogue. There's great value to be found in observing people in silence. That's something that I enjoy as a moviegoer, and as a filmmaker I don't often have the opportunity to do that. For example, in the Disney movie, you can't have long silences, the kids will get bored. This was an opportunity for me to just dig in to something I really want to do stylistically and to make myself happy as an audience member.

DT: What are some quiet movies that inspired you?

DL: There’s a whole pantheon of pan-Asian films from the mid-2000's onward, filmmakers like Tsai Ming-liang, Hou Hsiao-Hsien, Apichatpong Weerasethakul who made their name in cinema that is very quiet, almost dialogue free. There's long shots, where very little seems to be happening. But then there are other movies that are very loud and have a lot of dialogue that have quiet moments within them. In (The Lord of the Rings) “Return of the King,” there's this brief moment where the camera just holds on Gandalf sitting by himself, before a battle. It holds longer than you'd expect, he's just sitting there and there's no music, there's nothing else, he's just sitting there. And because it's surrounded by so much sound and fury, that moment really is profound and speaks quite loudly. That was really influential to me. It's easy to look at a lot of the European or Asian filmmakers who really make this type of film regularly and say, "Those are the touchstones." But for me it's often more of the bigger movies or mainstream movies that manage to hide those silences in the middle.

DT: What is it that silence adds to a film that resonates with the audience?

DL: It allows for introspection, contemplation, observation and all sorts of things. When we are not confronted with external stimuli, we often turn inwards, and it allows you to process what you're seeing in a more intimate and personal way. Sometimes that also turns into just being distracted and losing focus on the movie and focusing on yourself or whatever's going on in your life, and that's okay. I love it when I'm watching a movie and there's a really long shot or a long sequence with no dialogue and my mind wanders and then makes its way back to the movie, and whatever it's wandered to or wherever I've gone in my brain, that becomes part of the movie-going experience, and I enjoy that.

DT: The film felt like a poem. Was that intentional in any way?

DT: Did you have any personal experiences that influenced your writing on "A Ghost Story”?

DL: My main one was just I had an argument with my wife about moving out of our house, and that was the root of the movie. We had a big argument and I decided to write it down because it felt like a scene from a movie, and that made it into the script. We shot the whole thing, and very little of it remains in the final cut, and that was really what set it off. It wasn't a contemplation of death or mourning or losing a loved one, although those things are all there too, but it was really just the idea of being attached to a physical space.

DT: With C's character, he's attached to this place as a ghost. In your mind do you personify places that have this sort of spirit in them, that stay there like that?

DL: I do. I don't know whether it's a real thing or not, and I don't know if it is the spirit of people or just the energy they've left behind. I like to think that it is that, or the accumulated energy of everyone who's ever been in a place. I feel that that's a thing that exists in the universe. I don't know what it is. I don't know how to explain it, but it just makes sense to me. For C, the character in the movie, he starts off being attached to a person, and then over the course of the movie realizes it's the space that he's attached to. I don't necessarily believe in ghosts in that way. It works really well for a movie, but I do believe that if we were to do the real-world version of this movie, whatever it is that he has left there, the next inhabitants would feel it. And I think that's true when you move into a new place, you get a vibe from it; you get the energy from it.

DT: Did you have a Christian upbringing?

DT: How do you think that influences your views today?

DL: It sort of doesn't. I always thought that it would be one of those things that has a pervasive influence on my life and my work, but it's proven not to on a conscious level. On a subconscious level I'm sure it is. I don't have any set beliefs in an afterlife, I don't have any dogma that I follow. I apply very pragmatic rules to the universe that I live in, and I allow for a little bit of mystery and "faith" in something. But I don't assign any sort of meaning. It's something I don't think about, and I'm curious that in the future, someday, I'll look back on my work and maybe it'll all be there. But I don't know what it is, and I don't self-analyze my work quite enough to be able to answer that question thoroughly, but I'm sure it's all there.