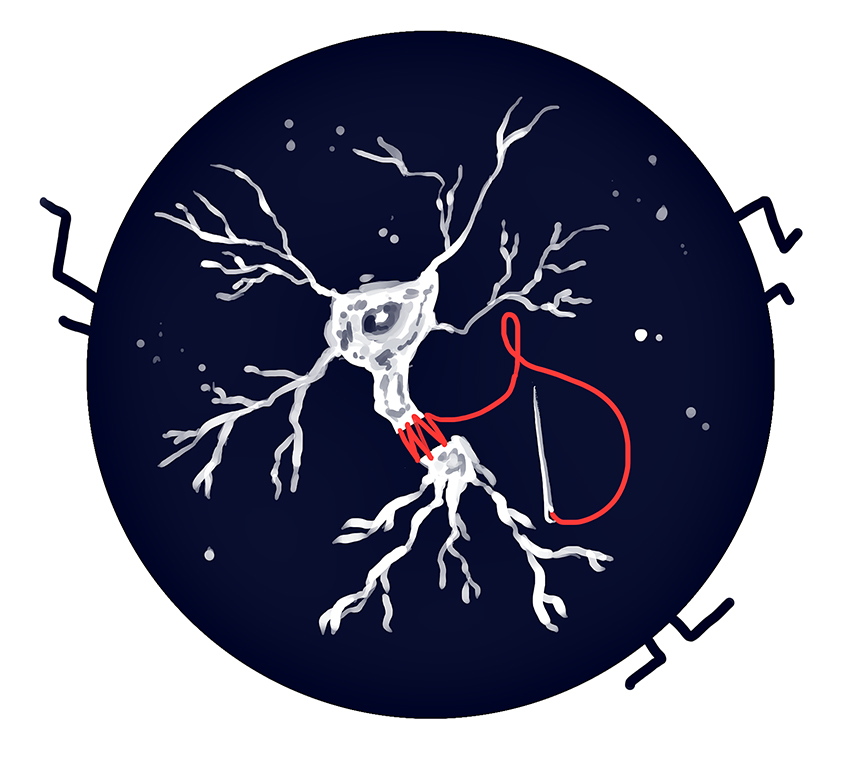 A UT neuroscience professor at the cutting edge of nerve research is learning to repair severed nerves.

George Bittner, a UT faculty member since 1969, is pioneering a new method to repair severed nerves through a chemical called polyethylene glycol, or PEG. The method has shown recovery of up to 80 percent in animal models.

The chemical works by fusing together the membranes that surround nerve axons that have been severed. Bittner’s team typically cuts through the leg nerve of rats, guinea pigs, or rabbits and measures their recovery, although PEG research started by studying regeneration in crustaceans. The lab is also waiting for approval to work with humans.

The nerves that stretch from the spinal cord to the limbs of an animal transmit information to and from the brain through long membranous tubes called axons. Nerve axons typically use electrical impulses to transmit this information, which can include information about the senses, bodily function, or muscles.

Once a nerve axon is severed, however, it can no longer transmit information, cutting off communication between the brain and the affected area of the body.

“Normally, what a nerve does is it grows out like a millimeter per day,” said Cameron Ghergherehchi, a graduate assistant in Bittner’s lab. “So if you do the math, it’s gonna take months and months for there to be any kind of hope for that nerve to reach back to where it should be eventually.”

For people who are paralyzed, this can be an issue. If the injury happens in the spinal cord, the axons will not grow out. If a nerve is severed in a person’s limb, it will grow so slowly that the muscles could severely atrophy by the time the nerves reconnect, assuming they even manage to reconnect to the right place.

“The central nervous system is unique in that it has almost no regenerative capabilities,” Ghergherehchi said.

Over the past few decades, Bittner’s team has shown that it is possible to reconnect the axons of small mammals, such as rats, with a technique called PEG fusion. First researchers use a calcium-free saline solution to wash out the wound and prevent the cut ends from sealing themselves off, Ghergherehchi said.

The next step is to use an antioxidant to help PEG work better. Then, the nerve ends are stitched back together and PEG is applied, he said. After a couple minutes, the fusion site is rinsed off and the procedure ends.

“We know that they’re reconnected within minutes,” Bittner said. “But proper return of behavioral function doesn’t occur typically for at least some days and usually a couple of weeks.”

The researchers test the newly whole nerves by running an electric current through the area, according to Nicole Wong, an undergraduate lab assistant who was able to conduct the PEG fusion herself.

“We know electrophysiological continuity of the nerve is reestablished by sending electrical signals across the injury site and measuring the difference in signal strength before and after the site,” Wong said.

Bittner said the severed axons don’t have to reconnect exactly in order to recover, which raises questions for neuroscientists about how flexible these connections are.

Bittner said the data strongly suggests that this method could be used to treat humans. He added that physicians have conducted at least four case studies based on his research, all of which he said resulted in faster re-innervation of nerves, and much better return of function than would have occurred using traditional methods. However, there’s a catch.

Much of this procedure is dependent upon getting a clean cut with the ends still close together, Ghergherehchi said. If this does not happen, there is a potential to damage the nerves by stretching when trying to join them together. He said the lab’s solution was to experiment with taking a nerve from a donor animal to insert it into the gap.

“We’ll take a sciatic nerve from a different rat — called our donor rat — implant it into a host rat, where we’ve cut out about 8 mm of sciatic nerve, take that out (and) put the host nerve in,” Ghergherehchi said. “We’ve had animals that three days later had 80 percent recovery.”

The next step for Ghergherehchi is xenograft studies: Those that use entirely different species as the host and the donor systems. If this works, he said, it has clinical implications — human donors may not be needed.

Wong said she is also excited about the clinical trials starting to use the technique.

“We’re currently involved with a hospital in Pennsylvania, running actual clinical trials with the PEG-fusion protocol on patients who volunteered to be a part of this study,” Wong said.

Bittner said he plans to continue to ask questions about how membrane sealing works and to return to his work with invertebrates, or animals without spines.

According to Bittner, if invertebrate axons are severed, they do not quickly degenerate. In previous studies with crawfish and other invertebrates, Bittner found that these axons can reconnect and either fuse together again or activate in a way that still sends signals to and from the cell body. This can happen within days, Bittner added.

“We are still doing studies on plasmalemmal sealing, and we haven’t done invertebrate work for some years, but now we’re going back and asking some basic science questions on invertebrates that we could not ask 20 years ago,” Bittner said. “But with improved techniques, we can ask today.”