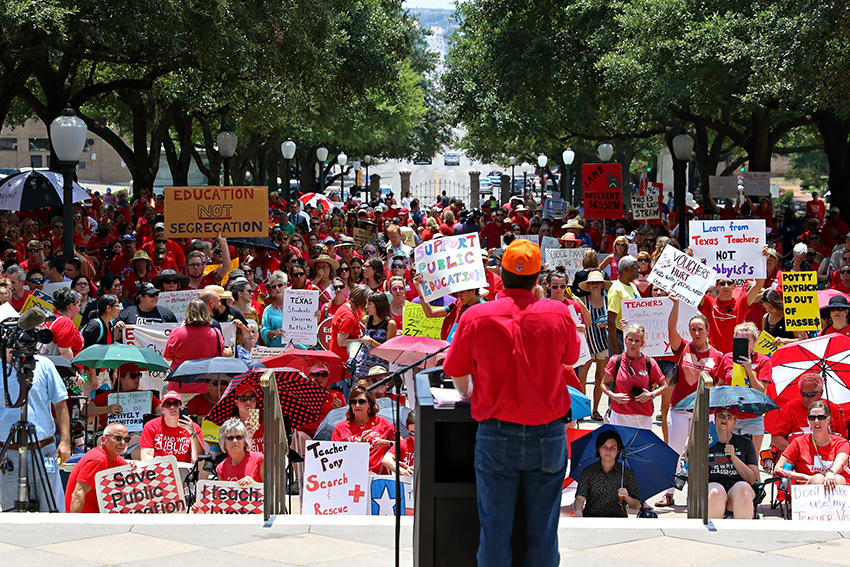 Hundreds of teachers in red shirts looked to the sky Monday afternoon as an airplane circled high above the Texas Capitol trailing a banner in support of a public education rally.

Current and retired teachers, parents and students rallied on the south steps of the Capitol to show their support for public education and denounce standardized testing, school vouchers, lack of public education funding and unfunded teacher pay raises. Many of the teachers present were also members of different major teacher associations, like Texans for Public Education, the organization that coordinated the rally.

The teacher associations signed a letter to Gov. Greg Abbott, Lt. Gov. Dan Patrick and Speaker of the House Joe Straus on Monday to express their disagreement with Abbott and Patrick’s special session items dealing with education.

Troy Reynolds, founder of Texans for Public Education, told the audience to remain focused and refuse to allow party affiliation to dictate their votes.

“When the voices of all of us along with the parents and community members who support us rise up in the next election, first they will fear us, then finally they will hear us,” Reynolds said.

Texans for Public Education supports block voting, meaning the organization rates politicians solely on their educational stance and members vote together according to the politician’s positions.

“We are 14,000 strong, and we are continuing to grow,” Reynolds said. “You might think you have us as part of your demographic, but you need to understand that you can no longer count on us to vote the party line.”

Many of the protesters and speakers opposed standardized testing and criticized the way STAAR testing results are revealed, and said the Texas Education Agency uses “fancy numbers” and “clever psychometrics” to mislead the public on a school’s educational standing. Texas is one of 13 states in the nation that requires the passage of a standardized test in order to get a high school diploma, according to the the National Center for Fair and Open Testing (FairTest) website.

Tim Lee, executive director of the Texas Retired Teachers Association, said more than 45,000 school employees leave Texas public schools every year because the Texas Legislature is forcing them out or because their retirements are not secure.

“If there’s one thing I am sick of, it is the war on teachers,” Lee said. “Everybody who’s an elected official should have a sense of embarrassment that our teachers and our retired teachers must stand in 100-degree heat and beg for money, again.”

One bill that was filed for the special session would allow state money for public schools to be used to help students with special needs pay for private school tuition.

Mara Laviola, a parent of two children with disabilities, held a sign that read “my child with special needs is not a pawn for voucher schemes.”

Vouchers are similar to coupons, backed by state dollars, which parents can use to send their kids to the school of their choice.

Laviola said she does not support vouchers in Texas public schools because when parents send their child with disabilities to a private school, they automatically lose federal protections under the Individuals with Disabilities Education Act because this law does not apply to private schools.

“The answer is not to segregate our children and send them off to alleged schools that they say can better address their needs,” Laviola said. “The situation is deplorable in Texas and if (the legislators) really want to help, then fund public schools.”

Laviola said she knows the special education system in Texas is not perfect, but said legislators should spend more of their time fixing the system than encouraging students with disabilities to attend private schools, many of which will not even accept students with special needs.