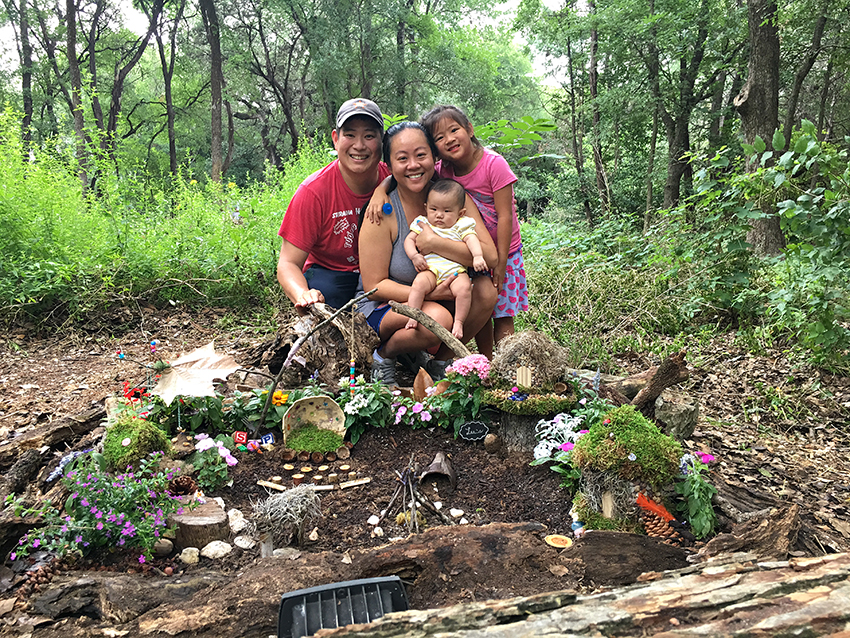 In an age of smartphones and televisions, spending time outdoors often takes a low priority. The Zilker Botanical Gardens gives residents the opportunity to connect with the outdoors at the Woodland Faerie Trail, which celebrates its fifth anniversary this year.

The program encourages families, local artists and school groups to build miniature faerie homes and gardens using only natural materials. The trail is only open in the summer and closes on Aug. 6.

Erin Lee first got involved with the trail two years ago because of her four-year-old daughter’s fascination with faeries.

Lee said she started looking for anything related to faeries, and found the faerie tea party at the botanical garden, which led to finding the Woodland Faerie Trail. Lee said the trail has helped develop her daughter’s desire to create.

“It helps her develop more imagination and creativity,” Lee said. “I like that she likes being outside. She’s all about finding different mosses to put in the faerie garden.”

This year’s exhibit, The Loved and Found Trail, includes three houses that surround an amphitheater and a tiny lost and found. Lee, who homeschools her daughter, enjoys the trail’s educational potential, such as learning about bugs and plants.

“(On the trail) we get to get out and it’s like doing school outside instead of doing school inside all the time,” Lee said. “In our space, we’ll take whatever we’re doing that week and hang out there, including nature journaling.”

Lee said her daughter, Josie, loves the whole process and is always thinking of ideas on how to make the houses more appealing to the faeries.

“She wants to think of more ideas that will make the houses bigger and more intricate like our houses,” Lee said. “It gets her thinking and when she starts thinking she gets excited. To her it is very, very real and that’s fun.”

Travis Jordan and his family are first time faerie home builders. He said his children were not interested until he started building the home, but once they saw it they became excited and started to help him.

“It’s something the kids look forward to and it’s a fun together time,” Jordan said. “When you have kids it’s an excuse to be a kid again and see things through their eyes. Their excitement is contagious.”

Christopher Sanchez, Zilker Botanical Garden’s Education Coordinator, said the faerie homes have become more elaborate since he began working on the trail, but the goal to help creativity and access to nature more available to Austin families is still the same.

“Children (in the city) don’t have a lot of opportunity to build in the woods and work with sticks and stones and leaves,” Sanchez said. “They can use different woods and invasive species instead of native plants to create.”

Both the families have enjoyed this year’s trail and intend to make new faerie homes for next year and for the foreseeable future. The Lee family is already in the early stages of planning.

“We’ve made it an annual family thing we do,” Lee said. “This year we got really into it and we have a lot of ideas for next year. We’ve already started saving things (for the home).”