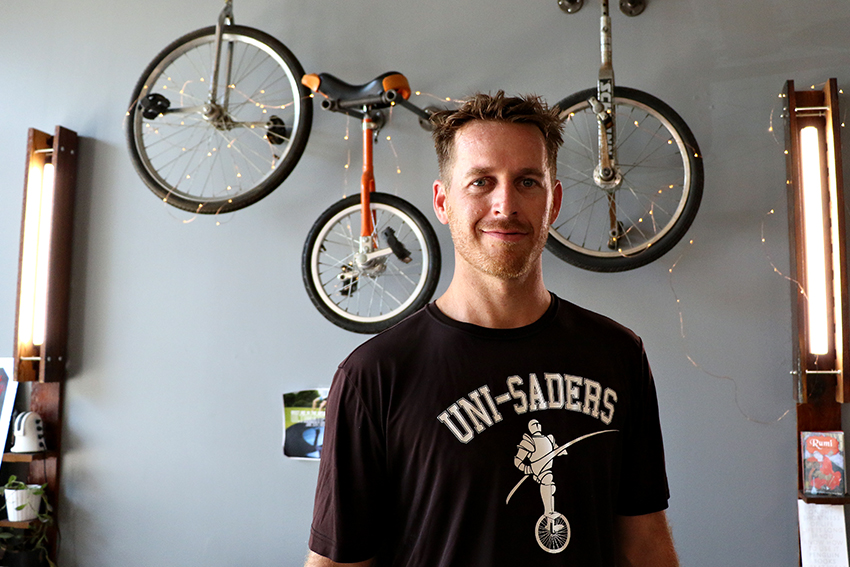 After challenging himself to become a unicyclist, a local schoolteacher kept a one-track mind and used this skill to teach students to balance self-confidence and team building.

In 2009, Jimmy Agnew started an after-school unicycle club at St. Andrew’s Episcopal School called Uni-Saders. Two years ago, Agnew expanded his program into a nonprofit called One Wheel Many Children that reaches a wide group of kids across Central Texas and beyond.

Though Agnew quit teaching at St. Andrews to run the nonprofit full time, he still helps out with the Uni-Saders program, teaching students values and skills beyond unicycling.

“Learning to unicycle is about balance of cognitive thinking and physical awareness, and we teach kids to learn together as a team,” Agnew said. “It’s the same thing we want to teach kids in the classroom, to problem-solve and challenge themselves.”

As both the programs continue to grow, Agnew said his mission is to create a network of communities for children from different schools to participate in unicycling together and build confidence in one another.

“By teaching the kids to unicycle and then have them teach other kids, we empower them,” Agnew said. “What’s really nice is when we have joint practices at different schools, and they all come together for the same practice on the weekend.”

Once Uni-Saders started gaining more attention from other public schools, Kama Bruce, the head of the Lower School at St. Andrews, began discussing with Agnew how to move forward with the nonprofit and make unicycling accessible to all school children.

“We started to think about how we could grow the idea of getting kids together across different socioeconomic lines, across racial and ethnic lines, all through the common experience of play,” Bruce said.

In 2015, OWMC approached the public school KIPP Austin Comunidad to include unicycling as part of their curriculum. Principal Justin Scott said he had no real expectations that first semester, but Agnew’s focus and enthusiasm helped steer a partnership between KIPP and OWMC.

“Jimmy literally came in with unicycles and brought out some volunteers and dedicated his time to just ignite excitement with the students,” Scott said. “At the end of the year, most of the kids were riding unicycles by themselves. It was amazing to see how their confidence had grown.”

The students also perform exercises outside of physical activity, such as journal entries to better their writing. Bruce said programs like OWMC are important not only because they enhance skills used in the classroom, but also because they provide an escape from the things that hinder child development.

“A lot of our students are exposed to high-stakes testing, and if they don’t do well they are seen as less than,” Bruce said. “So to have something where you can try again without judgment or pressure other than the pressure you put upon yourself, that is a great experience.”

Agnew said the best way he knows to educate students is through their innate sense of fun. Starting Aug. 1, Agnew is turning a school bus into a mobile unicycle gallery and driving around from school to school as a way to share OWMC’s mission for the coming school year.

“When kids are able to dedicate some unstructured time in their day to play with something challenging and learn through curiosity, it’s a whole different world,” Agnew said. “It’s not even about unicycling, it’s about all the skills that come with it.”