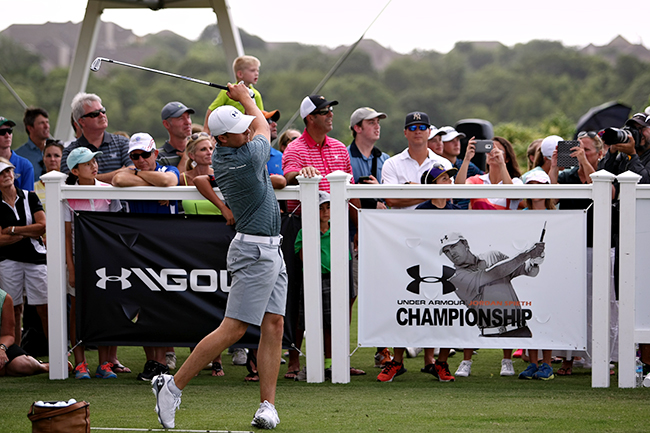 It was all unraveling for Jordan Spieth on Sunday at the Open Championship. Walking from the 13th green to the 14th tee box at Royal Birkdale, Spieth had seen his three-shot lead he began the day with evaporate into a one-shot deficit to Matt Kuchar.

Three bogeys in the first four holes had put Spieth in a hole. But the tee shot at the 13th had nearly ended all hope, sailing well right of the fairway into the dunes and thick rough, forcing Spieth to take an unplayable lie.

Minutes later, Spieth was scurrying with R&A rules officials for a place to drop his ball to play his next shot. The location was one completely out of the ordinary.

In the middle of the practice range and next to equipment trucks, Spieth was finally able to drop his ball and play what was his third shot. He ripped his driving iron over the massive dune in front of him with his ball, landing just short of the green.

Spieth miraculously got up-and-down to save bogey to still keep himself in the championship and one stroke behind Kuchar. But what transpired over the next hour was a furious rally by the 23-year-old Texan.

A birdie-eagle-birdie-birdie charge overwhelmed Kuchar and helped Spieth take back command of the championship. Walking up the 18th fairway with a two-shot lead in hand and the Claret Jug practically in his fingertips, Spieth had staged a comeback for the ages. One final par for Spieth at the closing hole and a bogey by Kuchar ended the day for the two the way it began — Spieth up three shots, as if nothing out of the ordinary had ever happened.

Spieth shot a final-round 1-under 69 to finish 12-under for the championship. With the victory, the former Longhorn has now completed the third leg of the career grand slam, needing just the PGA Championship to have won all four majors. Spieth won his first two majors in 2015 when he won the Masters and the U.S. Open back-to-back. Only Spieth and Jack Nicklaus have won three majors before the age of 24.

“Royal Birkdale has produced another great champion, this time a Longhorn,” Texas head coach John Fields said. “Jordan will share this with the entire state of Texas, our UT administration, UT alumni, UT student body, staff and professors that are at the University of Texas at Austin.”