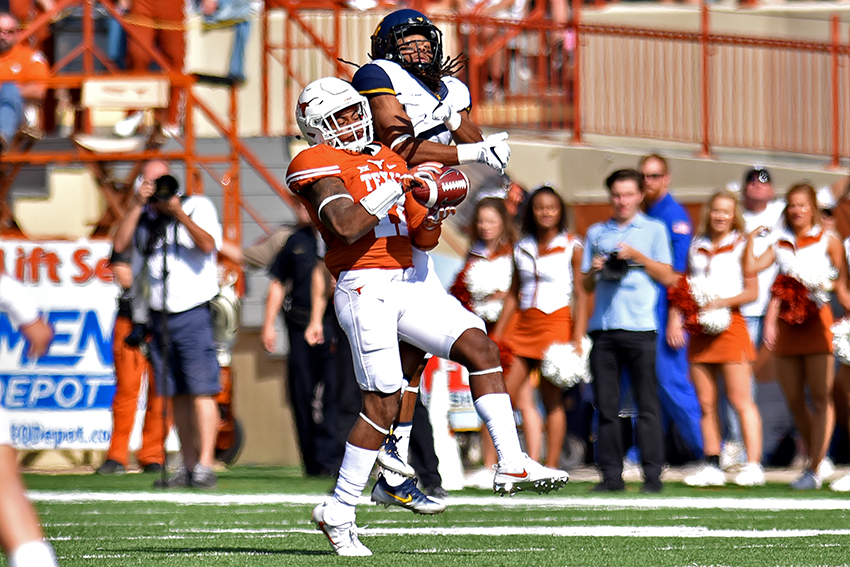 A forgotten water bottle in the players’ lounge one evening during summer practice originally appeared to be little more than a harmless mistake by junior cornerback P.J. Locke III. But he quickly learned to never make it again.

Soon after arriving back to his dorm room later that evening, Locke received a text from head coach Tom Herman in a group message with him and his position coach Jason Washington.

Long before the sun came up the next morning, Locke reported to the field, knowing a full day of hard work was ahead of him. And the punishment wasn’t without purpose. It was all part of Herman’s bigger message.

“You can do it another way, you really can,” Herman said. “We had a talk the other day. You can go party all you want, you can go enjoy Austin, enjoy college, enjoy Texas. You can do all of those things, but don’t come to me and say you want to win a championship then. Those two can’t coexist.”

Locke stood at the goal line preparing to do “air raids,” where he sprinted up and down the length of the field, touching the turf and returning to the goal line every five yards.

But that wasn’t all.

200 yards of air raids later, Locke found himself with a bottle of Windex in one hand and a rag in the other. He was tasked with cleaning the weight room and scrubbing the weights — all of them before the 5:50 a.m. workout that morning.

Locke hasn’t spent the offseason in Herman’s doghouse. In fact, he was praised by Herman on several occasions upon the coach’s arrival to Texas. Herman even went as far as to call Locke’s parents in the spring to express his gratitude for the way they raised their son.

“That is as favorite of a guy that I’ve got on this team and that was not a very fun meeting,” Herman said. “We called an actual meeting, me and his position coach, and I undressed his position coach and him for leaving his water bottle where he couldn’t have access to it.”

However, if anything was better than Herman’s reaction to a forgotten water bottle in the player’s lounge, it was Locke’s response soon after.

“The next day I tied my shoe string around it and hooked it around my neck,” Locke said. “You never know.”

One thing everybody does know, however, is the playmaking ability Locke can bring to the Longhorn secondary. He started in nine games as a sophomore, recording 33 total tackles, two interceptions and one fumble recovery. Pro Football Focus even highlighted Locke as one of the top cornerbacks in the nation in 2016, citing opposing quarterbacks’ miniscule passer rating when throwing the ball his way.

“He makes plays,” Herman said. “He does everything right … his work ethic is phenomenal and he is vocal. That is one thing we’re missing a little bit, is some vocal leadership.”

As week one approaches, the spotlight now shines brightly on the Beaumont native. There’s no escaping it. However, Locke doesn’t seem to be too phased by the extra attention.

“Yeah I see it,” Locke said. “But I don’t really pay a lot of attention to it because I just always try to focus on being better than I was the year before and just keep working on my craft.”

As Texas prepares to open fall camp next week, one thing is for sure. The entire secondary will need to be better in 2017 if the program wants to take a significant step forward. Locke has established himself as one of the team’s premier cover corners and is in now prime position to bring the Longhorn secondary back to prominence. Now that’s something he won’t forget.