Echo and the Bats make folk rock out of folktales 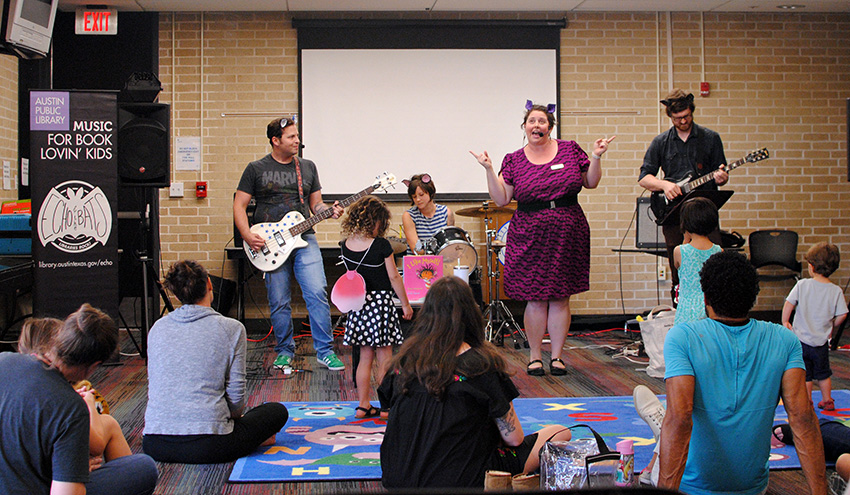 A puppet singing rock and roll and the story of a pigeon driving a bus to the tune of The Beatles might not seem like an everyday experience. But at Austin Public Library, this is the average show routine for Echo and the Bats.

This summer marks the two-year anniversary of local band Echo and the Bats, composed of four children’s literature librarians from the Austin Public Library. Since their inception, the band with a name straight out of a children’s book have dedicated themselves to the art of adapting kid, tween and young adult books into rock and roll melodies.

Band founder and drummer Jessica Hyink said she first came up with the idea after attending We Rock Camp, a rock music camp for ages 19 and up, where she became inspired to begin playing drums.

“When I got back, one of my colleagues Gabriel was suggesting, I think as a joke, that we could start a library band,” Hyink said.

Soon, Hyink gathered a group of volunteers willing to take part in the band and met for their first rehearsal, unsure of what to play and for who. Their first show attracted mixed age groups, but they soon found their audience to be younger children and focused on themes they would find relatable.

Band bassist Gabriel Ransenberg said though he never imagined they would play for such a young age group, the band has enjoyed the sincerity and responsiveness of their followers. Children, he said, are always very honest about whether they like the performance or not.

“We played a pretty large preschool and there were 150 preschoolers in the crowd,” Ransenberg said. “It was really excellent. The entire back of the cafeteria was up and dancing around.”

Last year James Loomis, band guitarist and UT alumnus, said they got the opportunity to play background music and during breaks for children’s mystery book novelist R.L. Stine’s reading at the library’s event Band Books: Libraries Rock. This, he said, was a significant moment for the band after growing up reading his books.

For lyricist and UT alumna Kathleen Houlihan, composing the children’s book-themed adaptations of rock songs came naturally. She said the process includes picking the book, finding lyrics within and then finding a rock song from the last half century to mold it to.

“I try to pull our phrases from the book that match up with the rhythm of the song and the mood of the song,” Houlihan said.

When choosing stories to spotlight, Houlihan said they try to give equal focus to new additions and classic tales.

“We want to both reinforce and validate kids’ love for books they already know, but also introduce them to books they might not have heard of before,” Houlihan said. “Part of the library’s mission is to support a love of reading in our community, especially with our youngest readers, and one of the ways we like to do that is through immersive book-related experiences.”

Hyink said past playlists include picture book “I Like Myself!” adapted into the Ramones’ “California Sun” and woodland animal-themed “The Mitten” turned into The Choir’s “It’s Cold Outside.” Currently, they are working on “Goodnight Moon” to Radiohead’s “Creep.”

After playing music since age 15, Ransenberg said the most enjoyable part has been encouraging children to pursue literature and the arts as more than a mere hobby.

“I think it is important to show kids that music and the arts are also things that you can work towards and have a career in,” Ransenberg said. “They are not just hobbies or ways to pass the time — you can make something impactful.”