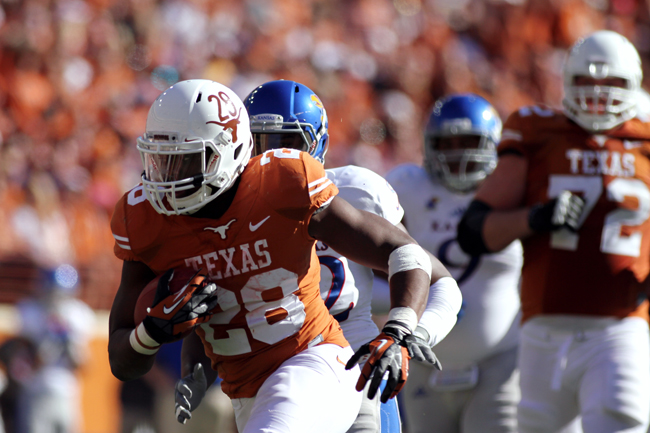 Malcolm Brown walked off the field for the last time in a Texas uniform in disappointing fashion.

Arkansas had just dismantled the Longhorns in the 2014 Texas Bowl, 31-7. Brown accounted for nearly half of Texas’ yardage in the contest – but don’t mistake that stat as a heroic feat in the face of disaster.

Brown totaled 25 yards on seven carries, a mediocre showing by most running backs’ standards. Texas managed just 59 yards as a team, an embarrassingly sour note for the then-senior to end his college career on.

Brown was a useful player in his time at Texas, but never fully lived up to his recruiting profile. He came out of Cibolo Steele High School as a five-star recruit and the No. 3 running back in the nation per 247Sports.

As a Longhorn, Brown battled Joe Bergeron and Johnathan Gray for carries. An injury during his sophomore season set him back, and before he knew it, Brown’s time on the 40 Acres was finished without ever eclipsing the 1,000-yard mark in a single season. He recorded a career-high 904 yards as a junior in 2013.

Nearly three years later, the 24-year-old Brown finds himself suiting up for the Rams in the NFL. He went undrafted in 2015, but the Rams took a chance on him in free agency. Logging just 22 career carries in his first two years with the franchise, Brown said he feels like it’s finally his time to shine.

“I feel a little bit more comfortable with the system and everything,” Brown said in an interview after a training camp practice on Aug. 2. “Every year I just come out here and try to work as hard as possible. That’s what I do every single year. Nothing can coach experience. That’s definitely been helpful to me — just having some experience.”

Though he has been around the team for two full seasons, Brown doesn’t have much in-game experience. That could change very quickly.

Former No. 10 overall pick Todd Gurley squeezes a tight grip on the starting job in Los Angeles’ backfield, and the Rams signed Lance Dunbar, a five-year veteran with the Cowboys, to back Gurley up. But Dunbar started training camp on the physically unable to perform list, and the severity of his undisclosed injury remains a mystery. And when Gurley needs a breather, first-year head coach Sean McVay said he knows who he wants quarterback Jared Goff to hand the ball to.

"I think clearly Todd has done a great job kind of leading that group, but I've been pleasantly surprised with Malcolm Brown," McVay said after practice on July 31. "He's kind of got a quiet confidence about himself where [he] just goes about his business. [He's] really reliable, knows what to do and what not to do. And he's a guy that we can depend on."

It’s taken a few years for Brown’s number to be called on the NFL level, but it’s a wait Brown has been comfortable with. There’s one attribute that Brown said has made fighting for playing time on the Rams roster more than bearable.

“Patience,” Brown said. “I’ve learned to be a little bit more patient. I came out of high school and stuff – in college, you’re the guy and everything. But this is my third year and I’m just now starting to get going and getting in the groove with the one’s and two’s and stuff. Patience is definitely what I’ve been teaching myself and learning these past couple years.”

Brown’s patience has paid off. If he continues to work as hard as possible every single day – as he said he does – then he might just be able to surpass his current career carries count within the first few weeks of 2017. He’ll just have to wait and see.