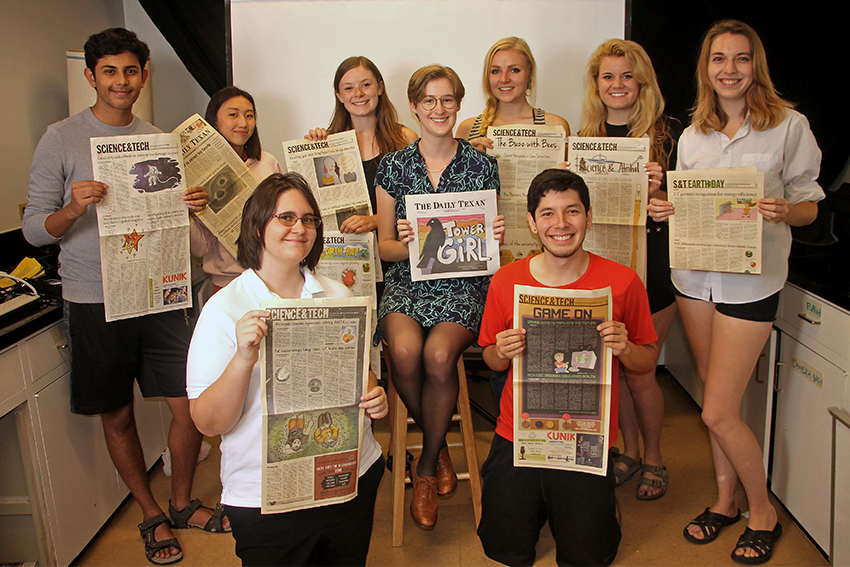 Editor’s note: A 30 column is a chance for departing permanent staff to say farewell and reflect on their time spent in the The Daily Texan. The term comes from the old typesetting mark (-30-) to
denote the end of a line.

Ellen Airhart, who started this crazy thing; Eva Frederick, who for her kindness and compassion deserves sainthood; Zia Lyle, whose love of chacos and genuine friendship will always be remembered; Peter Chen, who is the only person I will allow to call me a “little shit;” Jack Stenglein, whose humor I will probably get in a few years; Aditya Singh, whose energy is infectious and Julianne Hodges, who will be an excellent department head and an even better astronomy reporter.

It might surprise you all that before I decided to go into journalism, I was terrified of talking to other human beings.

For most of sophomore year, I huddled in my Kinsolving dorm room with the blinds drawn, stuck my nose in neuroscience textbooks and otherwise isolated myself from the world to avoid the chance of being rejected by it. I spent days without talking to a single person. At my worst point, I only went outside for class or to buy food from the convenience store downstairs.

You guys were my salvation. After adding on a journalism degree, I met professors who pushed me beyond my comfort zone, classmates who became fast friends and a profession which became
a passion.

Eventually, I stopped debating for hours about what to put in an email, made phone calls without a wavering voice and soothed panic as it bubbled up before face to face meetings.

It was the Science & Technology Department, though, that made all the difference. Over the past two years, the people here have built a home of a caliber that is both rare and precious.

As with most reporters who show up, blinking, at the Daily Texan’s doorstep, my first few weeks were filled with the prejudiced destruction of oxford commas and the forced migration of paragraphs. But I felt safe here, and after getting the hang of it found myself able to talk to anyone and about anything with confidence and elegance.

During my time as a reporter, I wrote about apps that fight cancer, canyons on Jupiter’s moons and using lasers to fight depression. I talked to people who really care about what they are doing and who are using their time to make a difference in the world.

As an associate editor, I worked with the ever-kind and competent Eva Frederick and Zia Lyle to help other reporters present this information to our school and the world. As department head this summer, I had the privilege of editing four new reporters from fields across the college of natural sciences, and the joy of three returning reporters.

At the Daily Texan, excellence is the baseline — we are here because we want to be better, stronger journalists. I like to think that we have helped bring this mindset to the SciTech department.

In the end, though, it was the family created here that convinced me that engaging with the world is far better than hiding from it.

From the bottom of my heart, thank you.