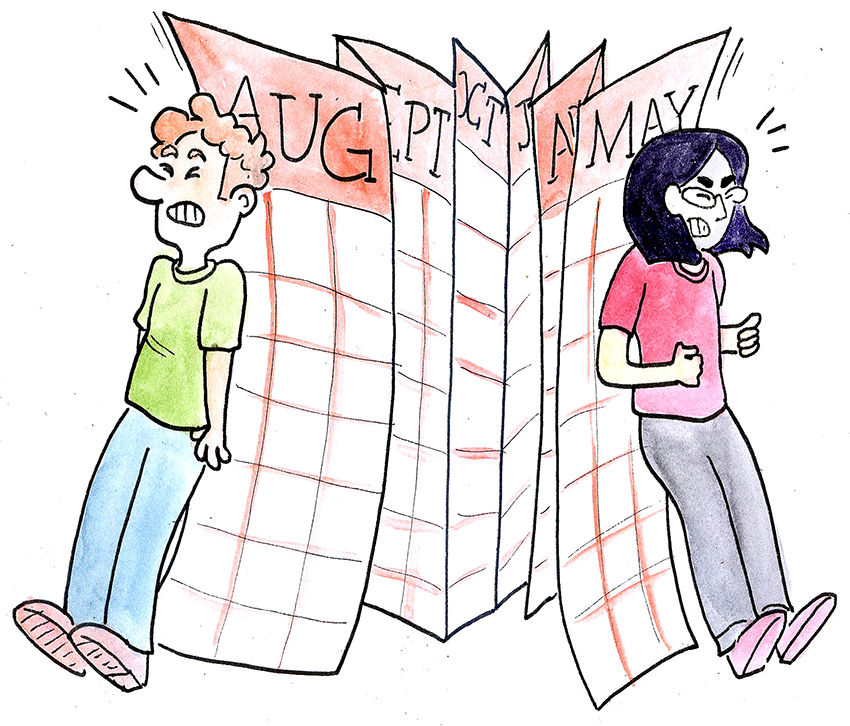 Students will be trading in one week of winter break for an extra week of summer this upcoming school year.

Last year, classes started on Aug. 24, and final exams ended on Dec. 14. This year, however, classes start on Aug. 30, and finals end Dec. 20. This change is a result of guidelines set by the Texas Higher Education Coordinating Board, which sets parameters on when fall and spring semesters are allowed to begin.

Vice provost and registrar Shelby Stanfield from the registrar’s office said the University follows the “common calendar” recommendations from the Coordinating Board and didn’t have much control over the schedule.

“There’s a whole set of conditions and requirements that go into setting the calendar,” Stanfield said. “By the time you map all that out, there’s very little discretion for shifting when the semester starts and when the semester ends.”

Stanfield said these conditions include the rules that a fall semester cannot start until the fourth Monday of August and must end before Christmas Eve.

The fourth Monday of August happens to fall six days later this year compared to last year and because UT’s fall semester begins on a Wednesday, the starting date was pushed back to August 30.

Last year, the spring semester began on Jan. 17 and this year it is beginning on Jan. 16. Because classes start at the same time in the spring, the result is the loss of one week of winter break, which is being traded in for one extra week of summer vacation.

Some students are frustrated with the rules because of how late classes will end in December.

Government and astronomy junior Amanda Quintanilla said she doesn’t like that the semester ends so close to Christmas.

“We don’t need a longer summer,” Quintanilla said. “Summer is already long enough. It really isn’t fair for the students that have finals on those last few days or the people who work for the University that won’t be able to go home until the 21st.”

Many of the guidelines set forward by the Coordinating Board affect the scheduling of the semester, including rules that say a semester must include 15 weeks of instruction and one week for final exams, and another rule that states a university must begin a term within seven days of the date set by the common calendar, according to the Coordinating Board’s website.

While some students may not be happy about the trade-off, others appreciate the extra week of summer break.

Samuel Weyser, a biomedical engineering sophomore, took classes this summer through the McCombs Summer Institute for Business Foundations. Weyser said he’s happy to be getting more vacation time at the end of the summer since the program just ended.

“I’m really looking forward to getting a full month at home because last year the students in the program only had a couple of weeks before school started back up,” Weyser said. “I’ll take a longer summer and a shorter winter any day.”