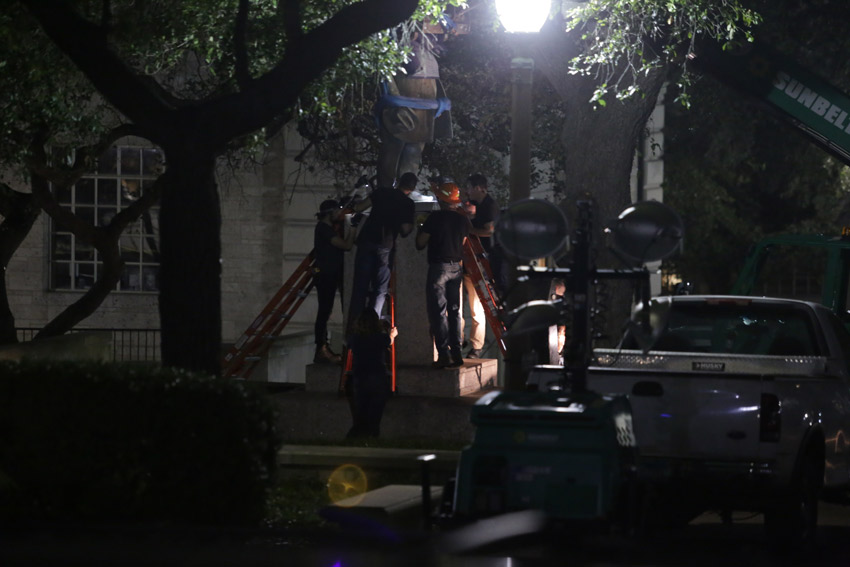 Students returning to UT will enter a campus altered for the better.

President Gregory Fenves announced Sunday that the four remaining Confederate statues would be removed from the Main Mall, as they “run counter to the University’s core values.” As students opened his emailed statement, work crews and trucks surrounded the statues.

Thousands of students, led by students of color, have protested the Confederacy-linked statues since their erection in the early 1900s — far before violence in Charlottesville, VA. As student body president Alejandrina Guzman said, “students are past the point of discussion” on this issue.

But the statues’ removal was just one step to reckoning with a still-painful legacy. The administration must also examine the memorialization of other Confederate-affiliated persons and actively support students who don't always look like UT's founders. For example, Robert Lee Moore Hall and Littlefield Dormitory are still named for a notorious segregationist and a Confederate officer, respectively.

Nor does not take long to generate a laundry list of overtly racist displays on UT’s campus, like the racist flyers that appeared on campus in May. These documented incidents do not even extend to the microaggressions that students of color experience every day. The momentum generated Sunday must be judged in the light of this semester’s pressing climate challenges before it can be counted as an enduring culture shift.

The statues’ removal offers an opportunity to honor accomplished, worthy graduates rather than elevate an oppressive past. Administration must also continue to consider how to increase the matriculation and retention rates of marginalized students, and better document hate and bias incidences. Only then can the removal of Lee’s figure also represent the repudiation of his views.

Though the statues should have never found a home on the Main Mall (they were defended as recently as February ) Fenves did ultimately acknowledge student concerns and take action. We must give credit where it’s due if we expect the UT administration to listen to its students’ voices going forward.

Even as UT combats vocal groups like the Sons of the Confederate Veterans—who sued UT on Thursday over its decision to remove the statuary— students deserve continued proactive, unambiguous advocacy against the forces of racism. Going into the new school year, we hope Sunday’s decision will set a precedent for more decisive action. Our campus needs it.