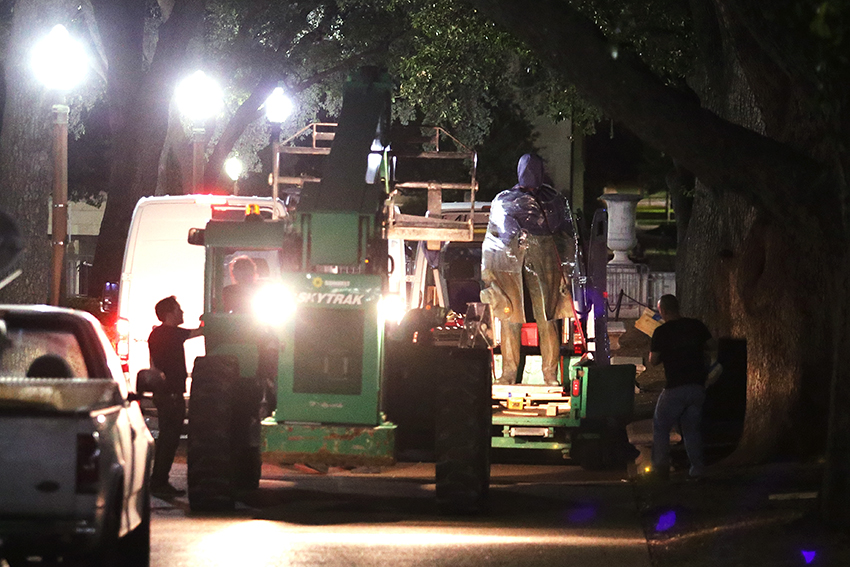 On Wednesday, the University filed to dismiss a lawsuit against President Gregory Fenves for his recent decision to remove four statues from campus, claiming the plaintiffs have no grounds to sue.

On Aug. 23, Steven Littlefield, a descendant of the former Confederate leader George Littlefield, who commissioned the statues in his will, filed a lawsuit against Fenves. The plaintiffs claim the University’s decision went back on its agreement to uphold the “Southern perspective of American history,” one of the stipulations spelled out in George Littlefield’s will and other documents in return for donations to the school nearly a century ago.

The Daily Texan spoke to two experts who affirmed that the plaintiffs in the case likely lack standing to sue the University. It is highly unlikely Steven Littlefield and the Sons of Confederate Veterans, another plaintiff, could win the case on their claim that the removal violated the will, said law professor Mark Ascher, an expert in trusts.

“(The will) is not binding on the University unless they agreed to it,” Ascher said. “The question then becomes, ‘How meritorious is the lawsuit?’”

Before it gets to that point, Ascher said he suspects the lawsuit would either be dismissed or that the University would settle because legal fees could end up outweighing the benefit of winning.

If the University did engage in an agreement with George Littlefield or his estate to meet the requirements included in the will, then they would be bound to its terms and could be forced to repay the modern value of the approximately $250,000 left to them in the will to erect the statues.

After almost a century of inflation, the current value for the statues is now worth more than three million dollars, according to the lawsuit. Because the land included in the will was directed for the purpose of building the Littlefield Residence Hall, it would not be included in the the amount the University would be forced to pay.

David Gracy, a great-grandnephew of George Littlefield, is a historian and retired UT professor who is currently writing a biography of Littlefield’s life. He said he knows of no documents or agreements between the University and the Littlefield estate promising to use the statues to meet the requirements in the will in return for donations and funding.

Gracy also said the original intentions in George Littlefield’s will — for the University to erect a “massive bronze arch over the South entrance,” with statues of both U.S. and Confederate leaders surrounding a fountain — never came to fruition. This was intended to represent the unification of the U.S. after the Civil War, he said.

“I don’t see any documentation where Littlefield said you have to teach (the Southern perspective of American history), whatever it is, and certainly there’s none where the University said ‘We will teach this,’” Gracy said. “The commitment was to display whatever the arch came to be and to continue to gather material from which to produce the history of the South, and that was done.”

Even if the current judge decided to order the reinstalling of the statues, it would almost certainly be reversed upon repeal, Ascher said.

“It is virtually certain that the court system would allow that decision to stand,” Ascher said about Fenves’ decision to remove the statues. “At that point, the law gets pretty mushy. Judges loathe to stick their nose into big bureaucracy’s businesses in the way that that would be.”

“(Fenves) acted extremely hastily without proper channels, without proper procedure and made a unilateral decision on his own to remove statues to American heroes,” Davis said.

The University said they typically do not comment on litigation to the media. However, they said in a statement that the statue relocation was carefully studied and “handled appropriately.” The Texan also reported that the University was in communication with student body leaders the week before the decision came, although Student Government as a larger entity did not play a major role in conversations.