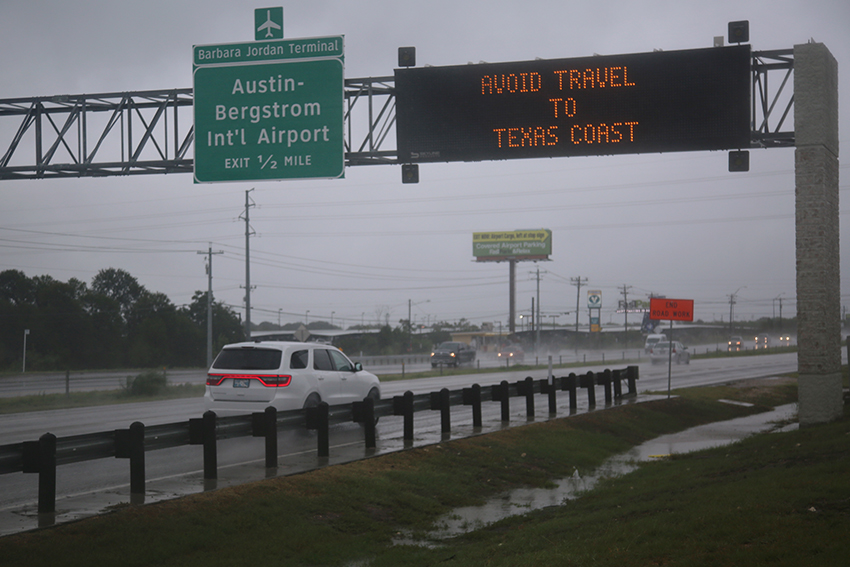 Last Saturday night, the floodgates of the heavens were opened. And in through the gap in the firmament came a mighty deluge.

First the street flooded, as it always does. Then it went onto the sidewalk. An errant car, driven by inebriates, attempted unsuccessfully to traverse the flooded roadway. As a last-ditch effort, it drove up on the front lawn. Its occupants abandoned the vehicle and then continued on foot.

In a matter of hours, the previous records of rainfall for Houston were shattered. At my parents’ home in Meyerland, atop a hill, the highest waterline had been in Tropical Storm Allison when the waters rose up to a magnolia tree approximately 15 feet from the front porch. The line was surpassed in the wee hours of Sunday morning. By the time we woke up, water was within spitting distance of the porch, knocking against sandbags that had been assembled.

There is only so much one can do to stave off floodwaters in a one-story house filled with antiques, for it is impossible to relocate an armoire into the attic. Still, we did what we could. The rugs were rolled up. The dining room chairs were placed atop the table. And anything with legs, be it couches or tables, saw them placed inside Red Solo cups.

The block has two drains, and one of them is at the base of our driveway. It has a grate that is often obstructed by debris in such high water events. Knowing we needed a miracle to stay dry, I walked into the water, well past my shoulders. Armed with a rake and a shovel, I hoisted up the grate and dragged it to higher ground. (As you may recall from your elementary science classes, things are significantly lighter underwater, making it possible to remove the 200-pound piece of metal.)

And then, almost miraculously, the rain stopped. It stopped long enough for the water to recede before the rain started anew and the water rose again. And so it went for the next few days.

Somehow, my family did not take water. We could not say that of our neighbors to the north, to the south, to the east and to the west. I do not know why we were spared, other than dumb luck. The arbitrariness of it all engenders some survivor’s guilt.

The morals of the flood are nearly cliché; they’re things we all knew antediluvian, but were reminded so clearly in recent days.

There’s the value of life, especially in comparison to things that can be replaced. There is the kindness of our neighbors. But perhaps greatest from my point of view has been the exceptionalism of Houston.

The current editor of the Texan and her four most recent predecessors can all attest that a recurring point of contention for my time at this newspaper has been my unfettered desire to pen columns of little note to those other than Houstonians. Rational or not, I have a pathological obsession and love of the city in which I was raised.

Harvey has dissipated. Early next year, meteorologists will retire his name, prevent it from being reused. It will fade from memory. But what will not ever fade is the strength of Houston in the face of this adversity.

Houston’s resilience has been noted of late around the world, as it will continue to be in the coming months. We will rebuild. We will move forward and forge an even greater city. Rising water can sweep away cars, but not our resolve. The floods can destroy homes, but they cannot destroy who we are.