Sessions: DACA “is being rescinded” with six-month delay 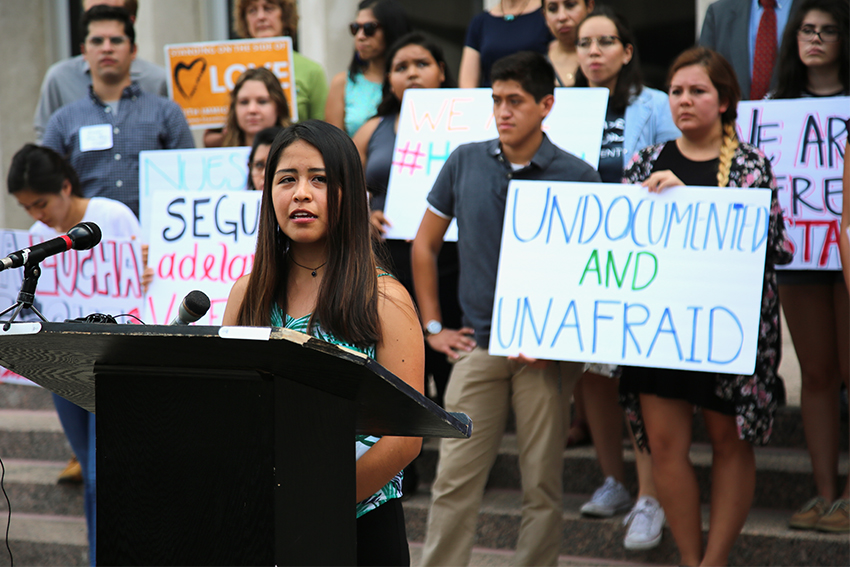 Current beneficiaries of the program, implemented by former President Barack Obama through a 2012 executive order, can maintain their DACA protections until the six-month period is over, but no new applications will be accepted.

Sessions said the executive order was implemented after repeated failures by Congress to pass its own version of the order during Obama’s first term.

“Such an open-ended circumvention of immigration laws was an unconstitutional exercise of authority by the executive branch,” Sessions said in a press briefing Tuesday morning. “The executive branch, through DACA, deliberately sought to achieve what the legislative branch specifically refused to authorize on multiple occasions.”

DACA allows so-called “Dreamers,” individuals who were brought to the U.S. illegally as minors, to defer deportation for two years at a time. Once enrolled, recipients receive an official Social Security number so that they can then apply for work permits and drivers licenses, but DACA does not provide a path to citizenship or legal residency. Close to 800,000 undocumented immigrants currently receive benefits from the program.

The last day current beneficiaries can either renew their DACA status or their work permits is Oct. 5 before the program is fully rescinded.

To be a DACA recipient, the applicant must have been brought to the U.S. illegally before they turned 16 and must be younger than 31. Also, they must have been residing in the U.S. since June 15, 2007 or prior.

The delay of the policy’s repeal gives Congress time to pass its own version of the program before its March 5, 2018 expiration date.

UT System Chancellor William H. McRaven said in a statement that Congress must act now to ensure DACA recipients have a “bridge” for them to remain in the U.S. and become citizens.

“(DACA recipients) can be certain of our support as you continue to pursue your dreams — the American dream — to obtain an education and build a better future for you and your families,” McRaven said. “As UT adheres to federal and state laws regarding immigration, rest assured our campuses will remain places where you can safely study as Congress takes up this issue.”

“At The University of Texas, we are defined and elevated by our students,” Fenves said. “UT brings people together. We don’t benefit by shutting people out.”

Tuesday was also the deadline given to President Donald Trump to rescind the program or risk being sued by a group of 10 states led by Texas Attorney General Ken Paxton.

DACA recipient Berenice Ramirez said the past six months have been especially stressful because she wasn’t sure the policy would live on.

“(Trump)’s just playing with our lives,” said Ramirez, health and society junior. “(It) is really something that I don’t understand how someone can do, how someone can have that on their conscience.”

Ramirez, who is also the president of the Latino advocacy group Jolt, said she’s spent the summer mobilizing support to preserve DACA and fight for a stronger version that would give DACA recipients and other undocumented people a path to citizenship.