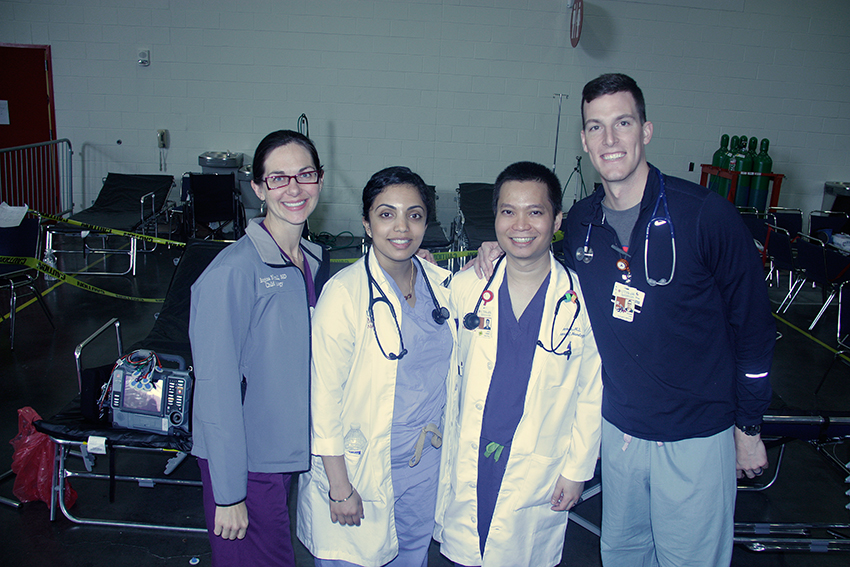 Both the centers reported minor water damage from leaks or water that rose through drainage pipes because of the unprecedented rainfall. Having experienced Tropical Storm Allison in 2001 and Hurricane Ike in 2008, UT’s medical centers in Houston and Galveston were previously equipped with flood doors.

“It was just a tremendous amount of rain,” Emery said. “With the flood doors and other controls being in place, that’s why our damage was very minimal. What’s very different this time is the extensive amount of flooding that is impacting the people, students, faculty and staff that run the University.”

Having returned to UTHealth last Sunday, Emery said he is impressed by the staff’s enthusiasm to overcome the chaos of Harvey.

“The folks that have ridden out the storm, they’re tired but happy in that they know things are kind of springing back to life,” Emery said. “The sooner we get back to normal, the better.”

More than 40 percent of MD Anderson staff are believed to have experienced flooding or displacement from their homes, Lu said in a press conference last week. Emery said UTHealth reached out to staff and students to assess how many have been personally impacted by Harvey.

“A lot of hard-working people, who themselves lost their homes and their cars or both, are continuing to come in to take care of patients, to take care of people in our community,” Reyes said. “Just like when Ike hit us in 2008 and we were literally closed, we had so many health systems in the area that helped us and took care of some of the patients that normally would have been coming here.”

All three health centers will help affected staff through employee-assistance programs. UTHealth will continue communicating safety hazards such as mold and toxic chemicals to help students and staff stay safe as they begin cleaning out flooded homes, Emery said.

Studio art senior Catherine Raymond said she was stuck in Houston during Harvey and thinks affected members from all UT institutions should be offered mental health support.

“There’s so many students that go to UT, every single branch of it, that are from (the) Houston greater area,” Raymond said. “Even if my house didn’t get flooded out, it came so close, and just that anxiety, (that) terror of it happening was awful, so I think there should be support from UT mental health-wise.”