With DACA’s end looming, immigrants and activists speak out 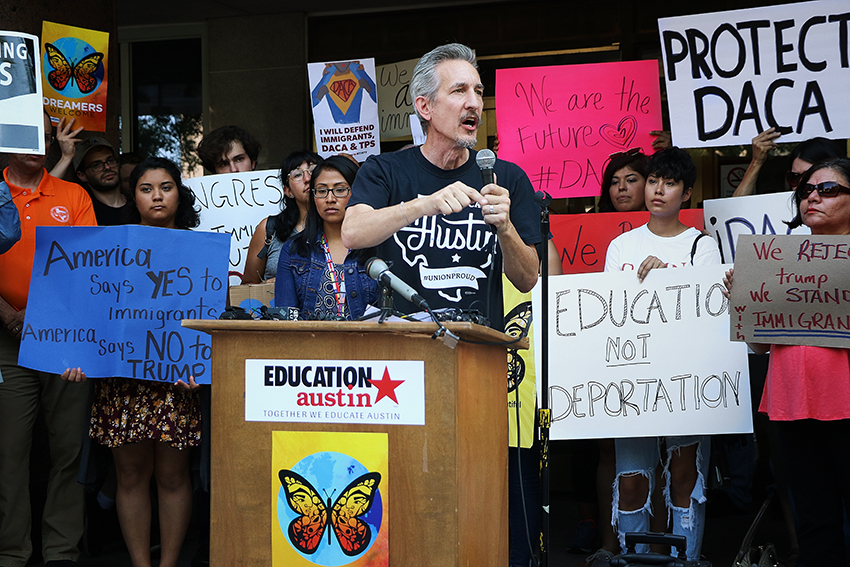 Will Clark and Chase Karacostas

The University Leadership Initiative, an organization for undocumented students, held a press conference downtown yesterday afternoon. Samuel Cervantes, a DACA recipient, said Trump made an “immoral” mistake in rescinding the program, but ULI plans to mount a congressional campaign to lobby lawmakers into passing an improved version of DACA.

At the ULI press conference, student body president Alejandrina Guzman said as someone born in the U.S., she needs to use her position to advocate for undocumented immigrants to ensure that they have a place here.

“I’m here to say I strongly oppose the president’s decision to end DACA,” Guzman said. “We must use (our) privilege and not be silent. This issue transcends communities.”

Megan Sheffield, attorney for the Equal Justice Center, also spoke and urged DACA recipients to renew their applications as soon as possible. She said the EJC “condemns” the decision by the Trump administration to rescind DACA.

“It’s irresponsible to cancel the program without a legislative solution already in place,” Sheffield said. “It’s also nonsensical to hang the threat of deportation over nearly 800,000 young people who grew up here and call the United States their home.”

Yesterday evening, dozens of activists rallied in front of the office of Texas Attorney General Ken Paxton, who pressured the president to end the program alongside several other state leaders. The protest was organized by United We Dream, a youth-led immigrant advocacy organization, and brought in teachers and students from Austin to share their stories.

“How dare our state, from Greg Abbott to Dan Patrick to this man in this building, Ken Paxton, deny people a right to the American Dream?” said Ken Zarifis, president of Austin ISD labor union Education Austin. “They are the American dream.”

Daniel Ramirez, a DACA recipient, came to the U.S. when he was 18 months old and grew up in Dickinson, Texas, a coastal town near Galveston. His brother and sister, both DACA recipients, graduated from Dickinson High School as salutatorian and valedictorian, respectively.

Ramirez went on to graduate from Middlebury College. Ramirez said DACA changed his life but he described some of the daily fears that come with being undocumented.

“Driving is very necessary in Texas. There’s a really sick feeling that you get when you see a cop, and you don’t have a license,” Ramirez said. “It’s sort of out of your control when you look the way I do.”