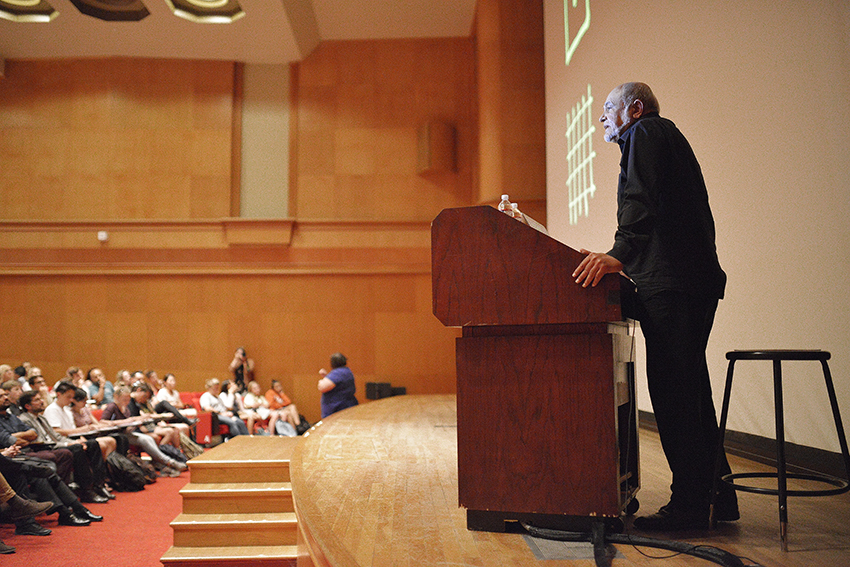 In his “Informal Space” presentation, Balmond discussed his renowned technique for using new technologies to take a mathematical idea and turn it into a design. Balmond has spent the last 40 years dedicating his life to investigating how to create alternative theoretical models.

Michelle Addington, dean of the School of Architecture, said Balmond’s work has helped create a shift in modernist architecture by redefining the concept of space and the meanings of form and structure.

“Cecil is turning this relationship (between mathematics and architecture) on its head,” Addington said. “What he has done is visionary and revolutionary.”

In one building, Balmond took the natural phenomenon of the “golden ratio” ­­— the Fibonacci sequence — to create a complex ceiling of thousands of blocks that are all proportional to each other. Balmond said he uses technology in combination with his imagination and knowledge of math to generate ideas for structures.

“That is just basic algebra, but now there needs to be architecture,” Balmond said.

Architecture junior Jack Behal said Balmond’s use of natural forms is what makes his work stand out from other architects.

“I found it really interesting how he is using modern technologies and computers and arriving back to these primitive forms,” Behal said. “It’s interesting to see how all of his work came full circle, from the building blocks of man, to the apex of technology today, and now back to the basic principles of life.”

Balmond said his different approach is what has made him successful, and he encouraged every young person in the audience to follow their own unique perspective.

“You have to find your own language, this only teaches you to be brave,” Balmond said. “You have to abandon your way of the past to find a way to express yourself.”

“It’s not structure determining form, or form determining structure, but his work is reimagining both,” Addington said.

Architecture junior Julien Brown said Balmond’s lecture was one of his most anticipated events this semester.

“He’s probably the most important speaker of the year,” Brown said.