Longhorns find chemistry on and off the court in Italy 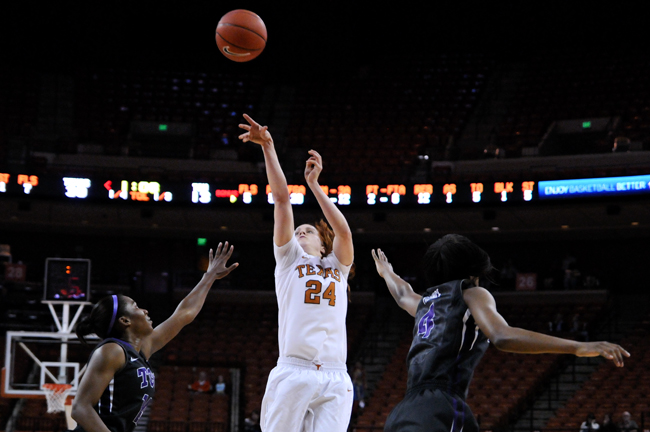 Junior Chassidy Fussell attempts a jumper during Texas’ win over struggling TCU. Fussell and the Longhorns look to end their season on a high note as they host new Big 12 West Virginia tonight.

Texas’ head coach wanted to take her players on an expedition that would expose them to different cultures and basketball competition. She had done the research, contacting other schools to gauge where she should take her team and what they should do. She also hired a travel company that specializes in basketball tours.

“I picked Italy because I believe there’s a lot of historical value, and you want it to be a good cultural experience for the team,” Aston said. “I think it’s a bit of a recruiting tool if you’re able to tell a recruit that they’re going to go to one of these places in their career here. Everyone kept saying that Italy was the one to go on. I can understand why, it was a remarkable trip.”

The team took flight on Aug. 11 and stayed for 10 days, making stops in Rome, Venice and Lake Como. However, Florence was deemed the consensus favorite stop among coaches and players alike.

Senior guard Ariel Atkins had been in Japan prior to Texas’ trip, playing for Team USA in the U24 Four Nations Tournament. She joined the Longhorns in Florence on Aug. 16.

“We wanted to go see Ariel (at the hotel), she had just gotten back from Tokyo,” sophomore wing Jada Underwood said. “The elevator is literally smaller than my dorm shower. They wouldn’t let more than four people get on there. And so we all get in, and it’s 12 or 13 of us.”

The elevator reached the third floor before stalling out.

“And we just dropped down,” Underwood said. “The light went off for a second, and then it came back on and we were just like ‘We’re stuck y’all.’ There was hot breath, sweat, it was horrible.”

The team spent 45 minutes waiting to be released.

“I didn’t get to see them until the next morning,” Atkins said. “That was probably the most fun part. I feel like they missed me as much as I missed them. I think this trip definitely gave us a chance to kind of see each other in different ways.”

“The elevator is going down in history,” Hosey said. “I feel like we got a lot closer. Now, we can go to each other and say ‘Hey, you’re slacking, pick it up.’ I feel like, before the trip, we couldn’t do that because we didn’t know each other that well. We thought we knew each other, but the trip made us closer.”

The improvement in the players’ bond translated on the court. The Longhorns opened with a 52-50 loss against Hannover in overtime. But in its second game, the team was able to seal the deal with a 88-56 victory over FSG Academy. In the Italy exhibition finale, the women decimated Basket Costa, crushing them 122-36.

Now back home, the players hope to see their progress continue.

“We learned togetherness,” Underwood said. “We had to be stuck in an elevator, you know we had to be together. You can tell when a team has chemistry on the court. I think the chemistry we developed over there carries onto the court, and it’s carried on since we’ve been back.”