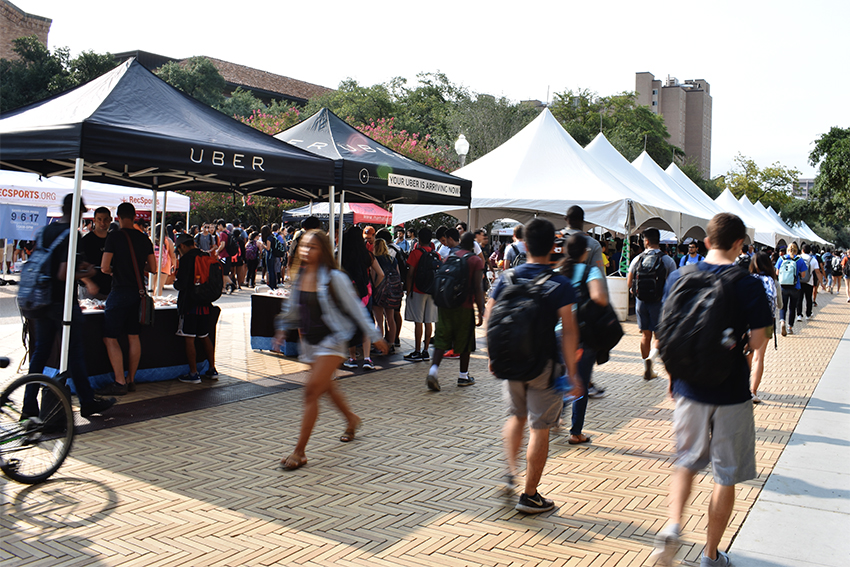 UT’s annual Party on the Plaza on Wednesday gave students a chance to look for organizations to join while also raising money for the Student Emergency Fund.

Party on the Plaza is part of Longhorn Welcome, a series of events meant to introduce students to UT. The event, located on Gregory Plaza and along Speedway, featured student performances, food vendors and a $2,000 scholarship. Presented by Uber, the event was organized by UT RecSports, which was recruiting students for various recreational sports.

A basketball competition was held by RecSports, who awarded the winner a $2,000 scholarship. Students were charged $1 for every basketball they shot in the competition. RecSports raised additional money by selling pizza. Darrow said the money raised will go toward the Student Emergency Fund, which is helping students that were affected by Hurricane Harvey.

“If the students are facing any hardships that they weren’t expecting, they’ll have that money if they’re granted it,” Darrow said.

Organizations ranging from fine arts, social, political, sports and community service were tabling at the event.

“We have a wide range of projects that fall under medical care, community building, educational training and vocational training,” Bruker said. “Some of our events include going down to Houston and also helping with campaigns, like Voices Against Violence.”

Neuroscience junior Adriana Medina, who attended the event, said that as a premedical student, she was interested in the pre-health organization Kappa Rho, which offers social and service opportunities.

“The amount of clubs that are available to students cannot be represented here, so there are a lot of clubs that you get to miss out on, sadly, but I think overall there is a pretty wide span of clubs,” Medina said.