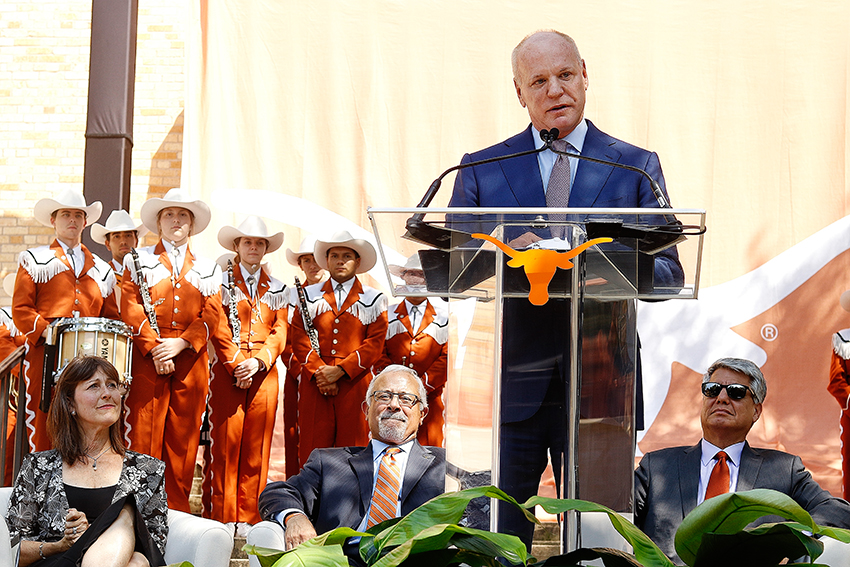 The donation will provide a total of $15 million for social work student scholarships and $10 million for education in fields like addiction recovery, UT President Gregory Fenves announced in a press conference yesterday. Hicks, a McCombs finance alumnus, said during the press conference he wanted to help social work students who usually don’t come from affluent families and “graduate with $45,000 worth of debt and go into a job with a $35,000 starting salary.”

“It’s hard to make those numbers work,” Hicks said.  “And my goal by this gift and the matching gift is to drive that number down significantly, and I think we can accomplish that over time.”

The donation, which creates a $10 million scholarship endowment and sets aside $5 million for gift matching to encourage additional donations, came as a surprise to most social work students, faculty and staff. Hicks wanted to give a lifetime award to the University, and was persuaded by Fenves and the University to specifically fund the School of Social Work, mainly for concerns with student debt.

“I’m thrilled that my students will have enough financial support to be comfortable pursuing their education,” Rhodes said. “We won’t be competing with their attention for, ‘How am I going to make enough money?’ They can actually pay attention to what it is they need to do in school.”

Social work junior Sarah Jones was inspired to pursue social work by her father, who was also a social worker. Jones said she has worried about making a living because her father had to pay student debt off for decades, but said she nevertheless wants to help youth.

“You’re putting in long hours for this population you care about and it’s just hard for your family to make a living to live in Austin,” Jones said. “It’s definitely worried me, but I think it’s worth it. Everyone that majors in it thinks it’s worth it. We love it.”

“I feel like this school allows you to do a lot of hands-on work, especially volunteering,” Lopez said. “So I feel like you have the resources and the actual capability to help someone, especially when they’re in crisis.”

Lopez said the School of Social Work is sometimes looked down on because students do not out-earn others in different schools.

“I want to say thank you, Steve Hicks,” Lopez said. “Thank you for donating, because I feel like a lot of people don’t consider the School of Social Work. It’s surprising that somebody would donate that much money to our school, so we’re excited and we’re happy.”