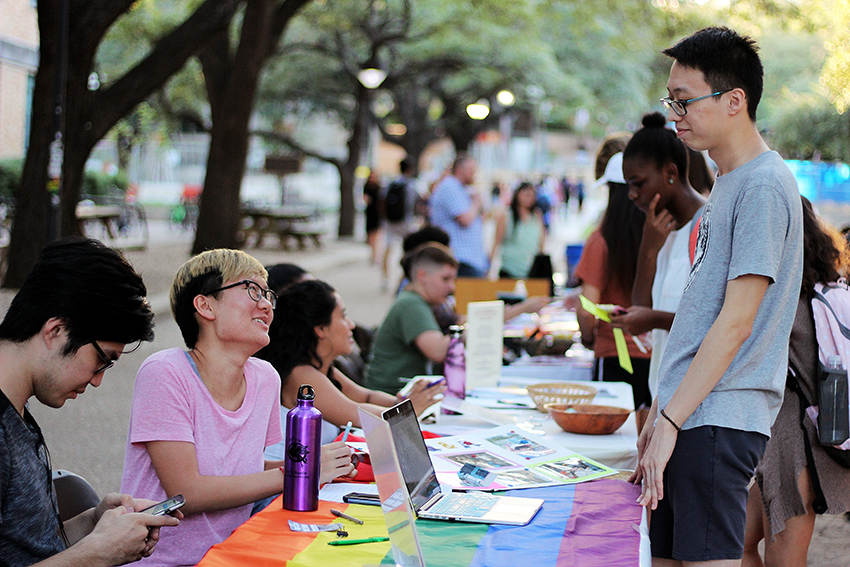 Hundreds of queer and transgender students of color, as well as allies, gathered on the East Mall Thursday night to tie-dye shirts and to celebrate the start of a new school year.

The Queer and Trans People of Color Agency hosted its annual BLOQ Party, an event that aims to welcome queer and transgender people of color, particularly freshmen or transfer students, to the campus community.

James Che, director of operations for QTPOCA, said the number of students who expressed interest in the event was encouraging.

“Building relationships with those folks has been really rewarding,” said Che, a geoscience and humanities senior. “Seeing how many people have been interested in getting involved even before getting to UT is really delightful.”

Che said that LGBTQ groups on campus have hosted BLOQ Party for at least 10 years. Che was first introduced to UT’s LGBTQ community when he attended the event as a freshman.

“It’s wild that three years later I’m running the same event that I came to when I first arrived,” Che said.

Social work senior Mika Shivers has attended BLOQ Party for the past four years. Shivers said the event is unique because it ensures safety and support for any identity.

“I think it’s really important for incoming students to have an event that’s out here in public and to have a bunch of queer people and allies congregated in a space feeling safe,” Shivers said. “I think that’s so vital.”

“This is a big transitional time, and it’s this portion of our lives where we really get to know ourselves and what we want to do with our lives,” Castillo said. “These sort of events really give us an outlet for that side of ourselves that might’ve been repressed in our younger years.”

BLOQ Party was organized in part by the Multicultural Engagement Center, which hosts six student-run agencies for different marginalized groups.

“The (QTPOCA) community has been my support network,” Che said. “Whenever I’m feeling down, I know that I have people to reach out to.”