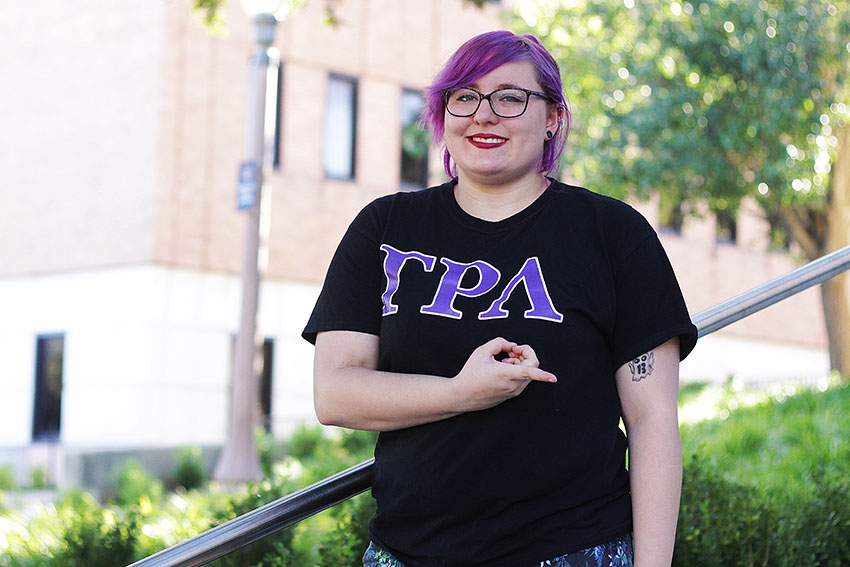 With organizations recruiting across the 40 acres, UT students are on the hunt for their own niche in a community of 50,000. Students have plenty of options with over 1300 clubs to join, but the task of choosing only a few can be daunting — especially at an age when young adults are only just beginning to come to terms with who they are.

After coming out after her sophomore year at UT, alumna Lauren Ferguson was faced with a similar choice. Having recently reconciled with being LGBTQ, Ferguson decided to fully embrace her identity by helping others do the same. Inspired by the special bonds she said Greek organizations help foster, Ferguson began the search for an all-inclusive organization, which led to her to creating a chapter of the LGBTQ Greek organization Gamma Rho Lambda.

“UT had such a gracious and blossoming Greek life, and it just felt like GRL needed to be a part of that,” Ferguson said.

Although she’d originally considered rushing a Panhellenic Council sorority, Ferguson said she was afraid her sexuality would make her feel like an outsider in one of those organizations.

“That isn’t to say that UT Panhellenic Greek (organizations) make people feel like outsiders … I think that’s not the case at all. I think, just as someone who was newly out, I felt anxious,” Ferguson said.

“Through joining the first official LGBT organization that I’ve been in, (it) really helped me come out to my family — and I ended up doing so the semester after,” Flores said.

Although, like Ferguson, Flores was initially interested in joining a traditional Greek life organization, he ultimately decided against rushing an Interfraternity Coucil because he was uncertain he’d be able to relate with fraternity brothers about being gay.

“When I first joined (Delta Lambda Phi), I honestly had a view that other fraternities were kind of homophobic,” Flores said. “There was a stereotype about that, but then as I started doing more stuff with Greek life, I realized that’s not the case.”

Ferguson said safe spaces, especially in the South, like those provided by Gamma Rho Lambda help students who may be coming from small towns where they might have been one of the few, or the only, LGBTQ individuals they knew.

“(A lot of our members) came from a place where (they) were really afraid to be themselves and didn’t know how to identify,” Ferguson said.

Oftentimes, Ferguson said, the common struggles of LGBTQ students in Texas actually bring them closer together.

“I love Tau chapter a lot, and there’s a lot of really strong people in there, and I think it’s because they work so hard to create a space where they feel safe,” Ferguson said.

“One, it helps people to get more comfortable with their schooling and not have to be as stressed out,” Cummings said. “Two, it allows us not only to attract freshmen students, but also transfers.”

Although Cummings said most Greek societies lack minority representation, she hopes to distinguish her chapter of Gamma Rho Lambda by increasing the groups it represents.

“Not only do we accept everyone, we give them a space to talk about that,” Cummings said. “We want there to be space for everyone to talk about how their intersectionality fits into all this.”