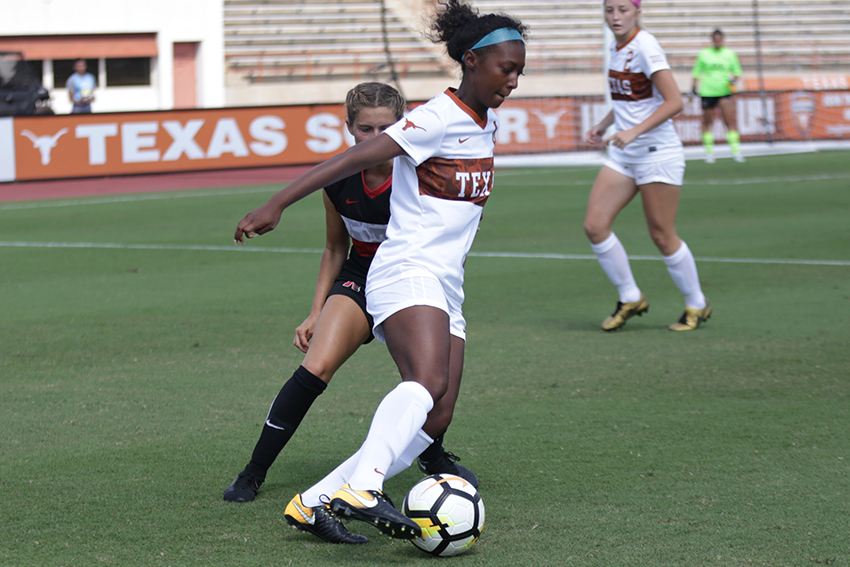 Texas keeps on climbing. The team improved to 7–0 for the first time in program history, rolling past then-No. 25 Colorado on Friday before dispatching Northeastern in a high-octane overtime thriller on Sunday afternoon.

Redshirt freshman forward Cydney Billups stamped her mark on Texas soccer with her first career goal on Sunday, netting a walkoff winner in overtime to defeat Northeastern 3-2 and keep the record perfect. The score marked the first overtime game-winner at home for Texas since 2014.

“Northeastern is a tremendous team. That is a quality squad,” head coach Angela Kelly said. “It took every ounce of us to win that match today.”

The Huskies took advantage of a free kick from 18 yards to go up early on the orange and white. A high ball from junior midfielder Valentina Soares Gache sailed just past the outstretched fingertips of Texas sophomore goalie Nicole Curry.

After three consecutive shutouts, Texas found itself down 1-0 heading into the locker room at the half. The Longhorns had netted six shots on goal in the opening period, all six stopped short by the Northeastern goalkeeper.

“We rose to the challenge and we grew,” Kelly said. “At halftime I told the squad I was excited, that we were going to learn something about ourselves this match, and the next 45 minutes or so was going to teach us.”

Freshman forward Emily Strouphauer was the first to answer for Texas. On a tough angle from the right side, Strouphauer fired from 14 yards out through the legs of a teammate to tie the game.

Five minutes later, a handball in the box gave junior midfielder Katie Glenn a chance to reclaim the lead off of a penalty kick. A dagger in the left corner did just that.

“That (left side) is always my go-to,” Glenn said.

But Northeastern would not be deterred. Three minutes after Texas went up, senior midfielder Hannah Lopiccolo scored her first point of the match on a tip in from a long cross to even the score 2-2.

From there Glenn got an excellent look off of a free kick from 18 yards out. But the chip sailed high and the game went into overtime, where Billups clinched the win for her team.

“It was really exciting, and I don’t think I could have done it without the support of my teammates,” Billups said. “And I was just looking to clean up everything that happened at the top of the goal and top of the six, and Katie’s ball came right to me.”

Sunday’s victory came off of the heels of a dominant 3-0 performance over Colorado two days earlier.

Friday’s game was slated as a slower, grinding matchup. Colorado hadn’t allowed a goal in any of its six previous games, and Texas had only given up two. But by the 25-minute mark, the score was 2-0 in favor of the Longhorns.

Later in the second half, sophomore forward Cyera Hintzen put the final nail in the coffin with a goal from 13 yards to earn the game’s final score. By the final buzzer, the Longhorns cruised to a comfortable victory.

“I think everyone is on the same page — we want to win,” Adams said. “We want to keep moving forward. We want to have a winning season and make the Big 12 tournament because we didn’t do that last year. So we have a target on our back and we want to show the world what we can do.”