All-nighters aren’t as valuable as students seem to believe 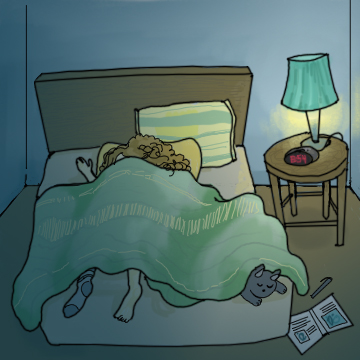 #TeamNoSleep, burning the midnight oil, all nighters: Regardless of what you call this unnatural behavior, it has become accepted as the norm, even a sort of rite of passage, as many UT students think back nostalgically to their first all-night adventure in the Perry-Castañeda Library.

Most people would probably tell you they believe energy drinks are bad, sleep is important and all-nighters are Satan’s punishment for not studying sooner. So why are they so common, exalted even?

Simply put, sleep management became uncool, and the enablers of this deadly habit are ubiquitous.

From Silicon Valley stories of greats such as Bill Gates and Steve Wozniak to media tropes of study montages and humorous misadventures, functioning on little to no sleep is touted everywhere. Hearing about Elon Musk steadily constructing a bit of code everyday is far less glamorous than hearing about him racing against time to brilliantly find solutions in the ninth hour.

But this culture is dramatically undercutting the efficiency of students. A study at St. Lawrence University reported that students who regularly stayed up all night to study had a GPA of 2.95, 0.25 points lower on average than their well-rested counterparts.

The benefits of sleep — improved memory, better focus, more energy — have been beaten to death, as have the negative repercussions of energy drinks: the all-nighter’s catalyst.

Normally, I’d call for legislation to regulate media depictions of all-nighters and President Gregory Fenves to take out every Red Bull and Monster can on campus. Unfortunately, that’s highly unlikely and, in reality, wouldn’t do much in ending the swagger factor of functioning without sleep.

Instead, take those stories with a grain of salt. Sleeping may not be cool, but it is important. Adopting an attitude of impassivity toward that guy in PCL bragging about how he hasn’t slept (or likely showered) in 18 hours can dramatically improve your health and efficiency in the short term alone. And in the long term, regulated sleep can decrease your stress and increase your longevity.

Sometimes, working into the early morning is unavoidable, but avoid it as much as possible. Look for an alternative to that fourth cup of coffee and schedule your day to make sleep a priority. Staying up all night invariably leads to sleeping all day. Managing sleep and avoiding all nighters can allow you to maximize your day. Sleep more, do more.

Batlanki is a neuroscience sophomore from Flower Mound.