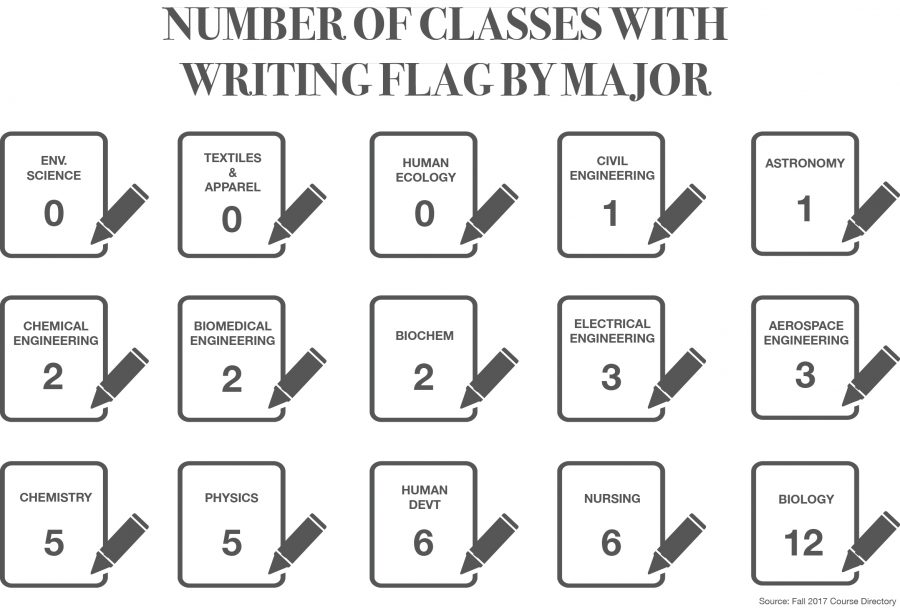 Many students go through their four years at UT focused entirely on the content of their major, determined to be as prepared as possible for their career. For some students, however, this creates a blind spot in their educational experience. Far too many students graduating with degrees in STEM fields do so without any writing ability, and it’s a real problem for the scientific community. As David J. Skorton, Smithsonian Institution head and physicist, puts it, “Many of us (scientists) never received the education in the humanities or social sciences that would allow us to explain to nonscientists what we do and why it is important.”

But the problem isn’t necessarily that STEM students aren’t interested in writing. Of the 2,673 undergrads who visited the University Writing Center in Fall 2016, 597 were College of Natural Sciences students, 264 were engineering students and 50 were nursing, while just three geoscience students made the trip to the Perry-Castaneda Library. While there seems to be an oddly low number of geoscience majors, those numbers are pretty close to what you’d expect. This is especially true given that CNS and engineering students typically have fewer major writing assignments in their classes. This data shows a clear interest in writing among STEM students. Since so few STEM classes have important writing assignments, most of these visits are likely for core classes outside of their major.

The problem seems to be the relatively small exposure most STEM students have to writing over the course of their four years.

Increasing the number of STEM classes offered with writing flags would be one easy solution for the University. Currently, the vast majority of the writing flags offered are in the College of Liberal Arts. Of the 514 courses with writing flags offered in Fall 2017, just 73 of them are in one of the 25 undergraduate STEM majors offered at the University. The 17,850 undergraduate students in CNS, Cockrell School of Engineering, School of Nursing and the Jackson School of Geosciences make up almost 45 percent of the undergraduate population at UT. But just 14 percent of the writing flags offered in Fall 2017 are in one of those colleges. It would take very little effort to add a flag to some of the courses currently being offered, and students would likely get writing instruction far more applicable to their career path in classes taught in their major, versus using core classes to satisfy this requirement. Instead of making biochemistry majors spend time on 18th century literature, let’s allow them to practice writing research papers with their writing flags.

Another potential option is encouraging more STEM students to take classes outside of their majors, even when it doesn’t complete a requirement. “Taking rhetoric classes could be useful for folks who are less comfortable with writing,” says Hannah Harrison, a doctoral candidate specializing in rhetoric and the former assistant program coordinator of the UWC. “Rhetoric helps you think about the processes that contribute to effective writing for different audiences.”

No matter what the solution is, the need for change is evident. Medical schools increasingly seek out liberal arts and humanities students because of their writing and communications skills; Turing Award winners are beseeching undergraduates to work on their writing skills, and more than 73 percent of employers want candidates with strong written communications skills. If you want to change the world, you’ll probably need to be able to write about it first.

Price is a government sophomore from Austin.