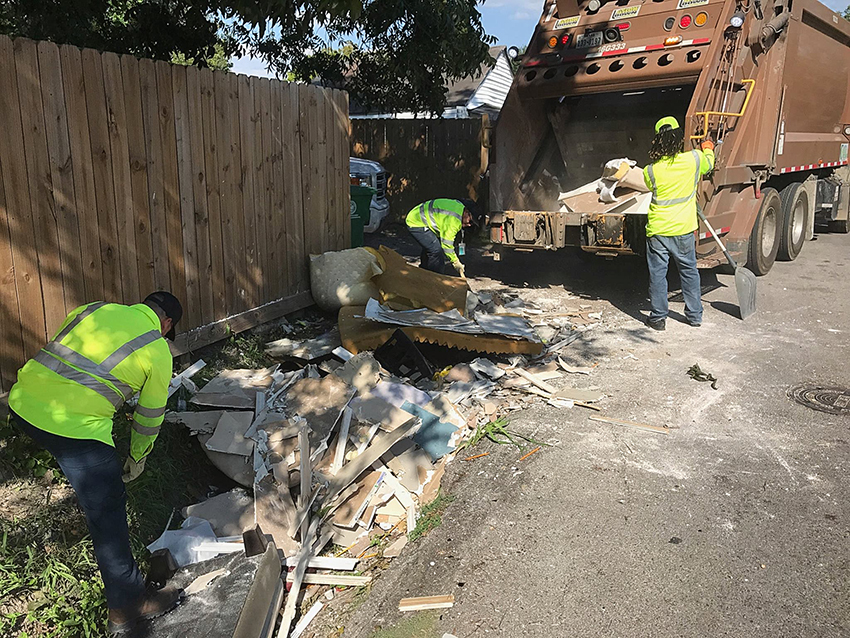 Bulk trash collection and street sweeping services will be affected over the next few weeks while City of Austin cleanup crews help clear trash and debris in areas damaged by Hurricane Harvey.

The cities along the Gulf coast sent out calls for help with cleanup and repairs after Harvey ravaged towns and flooded large chunks of Texas from Houston to Corpus Christi. The Austin transportation, resource recovery and energy departments heeded these calls and have been sending out crews for several weeks to help out.

Currently, the resource recovery department is sending out new cleanup crews every five days to clear debris. The first crew was scheduled to leave Monday morning but was so eager to help out that they left a day early, said Memi Cardenas, public information specialist senior.

“We need to stick together and help each other out in these times, and for us it means a couple of service delays, for them it means cleaning up their cities and getting life back to normal,” Cardenas said. “(Our crews were) really excited to get out there and to help.”

September bulk trash collection has already been scheduled and carried out, so October’s collection is currently delayed until the city finishes helping out.

Just days after Harvey moved on from Texas, the transportation department sent a crew of 23 workers and supervisors to replace stop signs and fix dozens of broken stoplights around the city of Victoria over the course of a week.

“Our department just feels that we were lucky that we were in a position to mobilize and send crews down there,” public information specialist senior Cheyenne Krause said. “They needed our help, and we were more than happy to give it.”

In total, the crew replaced 122 stop signs and fixed 73 of 79 broken stop lights, which would’ve presented a major problem if left unchecked as residents returned to the city, Krause said.

Victoria faces another problem as most of the local repair crews had to miss work due to damage to their own homes, leaving little time to try and fix wreckage all throughout the city, Krause said.

“They were dealing with personal damage to their own property as well and still trying to help their own community,” Krause said. “I think that was really motivating for our guys to see as well, so I think that was a really good team effort between the communities.”

Public relations junior Braelyn Bianchi, a resident of Victoria, said she really appreciated that large cities such as Austin were not forgetting about small towns affected by the storm.

“It’s really comforting to me since my hometown needs some help and my new town is helping out,” Bianchi said. “It’s a natural disaster, and there’s nothing we could’ve done to prevent it. You just have to take baby steps in making it better, and I think that’s what our towns are trying to do.”