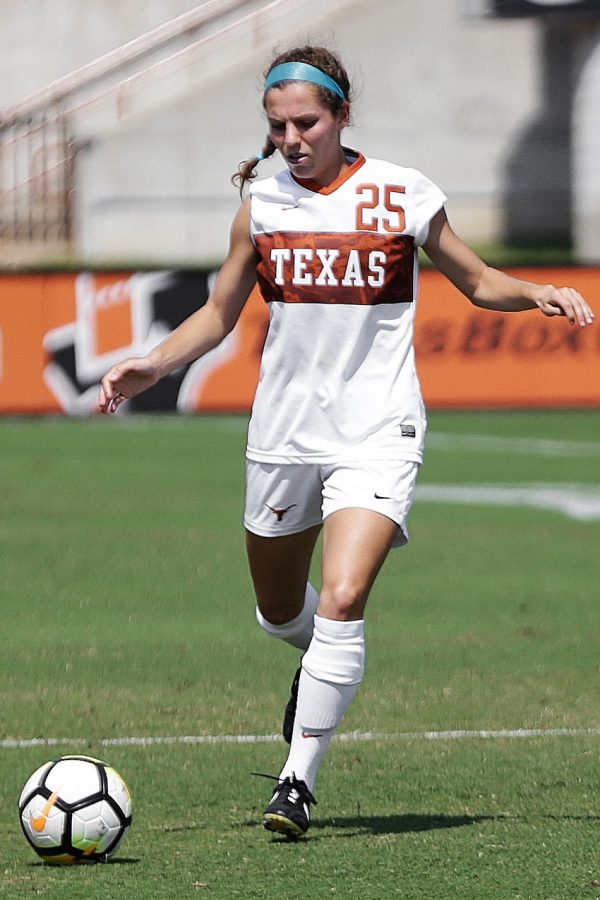 Looking to build on an already historic start, the Longhorns host UT-Rio Grande Valley on Friday night at Mike A. Myers Stadium. The matchup against the three-win Vaqueros offers the team a bit of breathing room after last week’s overtime thriller.

Texas is expected to win handily against Rio Grande Valley, after rocketing out to its best start under the six-year tenure of head coach Angela Kelly. The Longhorns’ leader attributes the team’s early success to the slow cultivation of the program’s values across the past six seasons.

“You don’t just build a program that has the ability to face adversity and continue to find ways to win overnight. It takes time. It takes the culture,” Kelly said. “It takes having competitive fiber within that culture. And it’s got to go from top to bottom.”

Texas is one of seven remaining undefeated programs in the country. Leading the charge for the Longhorns is junior midfielder Katie Glenn, who earned her first career Big 12 offensive player of the week nod following her two goal, one assist performance last weekend. She notched the first score of the season against Colorado’s formidable defense and then gave Texas the lead on a penalty kick in the team’s win against Northeastern.

But Glenn isn’t alone in powering the Longhorn offense. Eight Texas players have found the inside of the twine in seven games. The numerous scoring threats prove a nightmare for opposing defenses, who are forced to respect every member of the orange and white frontline. Prior to Sunday, the Longhorns had yet to win a match this season where their opponent scored two or more goals.

“If I was on the opposite side of the table and I’m thinking about how we organize against Texas, it would be a challenge,” Kelly said. “A lot of those players — the Cyera Hintzens, the Haley Bergs — they are drawing two and three players with them every single time they touch the ball.”

Friday’s contest is the last of Texas’ games before the start of conference play. The Longhorns will be thrown straight into the fire, kicking off its Big 12 campaign against Iowa State and then West Virginia. The Mountaineers finished with a perfect 8–0 conference record last season.

In spite of Texas’ progress, the team still has a long way to go before vying for the Big 12 title and NCAA tournament success. But if this opening run is any indication, the Longhorns are more than up for the challenge.

“We can be better. We can do a lot of things just a little bit better,” Kelly said. “And the players are excited about that.”