USC’s Mitchell getting back on track after ACL tear 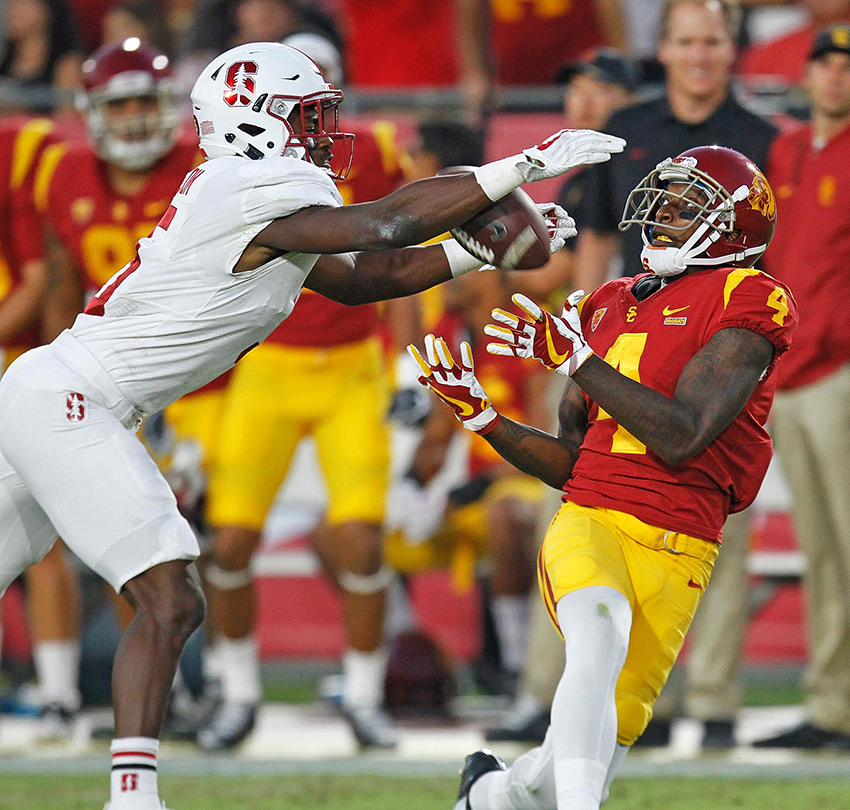 USC wide receiver Steven Mitchell Jr. sprinted out of the tunnel at the Los Angeles Memorial Coliseum on Sept. 2 with a feeling of renewal and optimism.

The redshirt senior had been restricted from the gridiron since tearing the ACL in his left knee last October in a 48-14 win over Arizona. He was sidelined for USC’s final six contests, all of which resulted in victories. USC is still riding an 11-game win streak, and Mitchell finally rejoined his teammates in the season opener against Western Michigan.

“It was bittersweet because I knew that it was my last first game in ‘The Coli,’” Mitchell said. “I had to cherish it. I’m glad we came out with the W. Hopefully we come out with a W every week.”

Mitchell’s injury history extends long before October 2016. Before his freshman season in 2013, Mitchell tore the ACL in his right knee, forcing him to miss the entire year. In 2014, he sprained his knee in the Trojans’ Holiday Bowl victory over Nebraska. Mitchell participated in the majority of the 2015 campaign before missing half of last year with a torn ACL in his left knee.

But after two games this fall, Mitchell is finally healthy and a staple in head coach Clay Helton’s offense.

“I’m honestly happy just to be back on the grass,” Mitchell said. “It’s hard to come back from two ACL (injuries). I’m really getting the support of my teammates and my coaches, just happy to contribute as much as I can.”

Mitchell has rehabilitated his injuries utilizing treadmills and underwater training as part of his recovery process. Resistance exercises are also frequent in Mitchell’s workout routine.

“Hard work is really impactful when it comes to injuries, so that’s helped tremendously,” Mitchell said.

The senior wideout started the team’s opener against Western Michigan. Mitchell caught four passes in the 49-31 decision and followed up the performance with a four-reception, 94-yard outing against then-No. 14 Stanford in Week Two. Most importantly, Mitchell contributed to the scoring effort against Stanford, posting two touchdowns — his first multi-score game since Sept. 19, 2015.

“That’s always a confidence booster,” Mitchell said on his two-touchdown performance. “Everybody wants to score every game, but it’s not always like that. So when you get those opportunities, you have to cherish them. It’s been a blessing so far.”

Mitchell is a native of Pasadena, California, a town most renowned for the site of the Rose Bowl — UCLA’s home stadium. But instead of attending Bruin games, Mitchell grew up a die-hard USC fan. In 2005, Mitchell recalls the moment the
undefeated Trojans fell to the Texas Longhorns, 41-38, in the BCS National Championship Game at the Rose Bowl.

“I was very, very sad,” Mitchell said. “I really didn’t even want to go to school the following Monday.”

Saturday evening at the Coliseum will be USC’s first chance to avenge Texas after the historic game in 2006. Nearly 12 years later, instead of watching from a television, Mitchell will be hoping to help the Trojans knock off an upset-hungry Texas squad.

Mitchell, a communications major, is currently working toward his master’s at his dream school after completing his undergraduate work in 2016. When this semester concludes, he is set to leave Los Angeles with two degrees from the university. His time with the Trojans is nearing its end, but Mitchell still has plenty to accomplish before turning in the textbooks and hanging up the cardinal and gold jersey.

“I’m just trying to make the biggest impact I can,” Mitchell said. “Hopefully, I’ll get some looks by some scouts. It’s my main goal to go to the NFL Draft and get drafted. But I’m really just focusing on the team and what we have each week.”