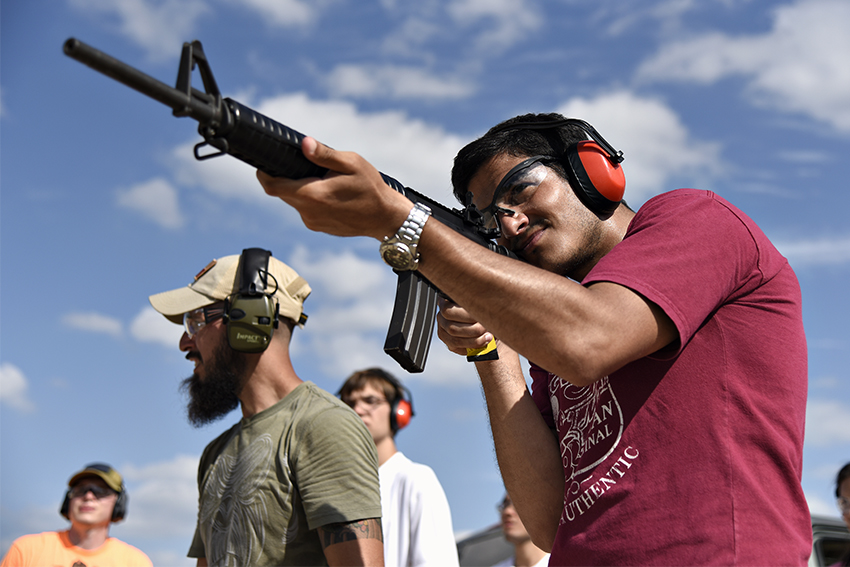 Tinsai Worke had never shot a gun before — she feared her small frame wouldn’t handle the recoil ­— yet she gleefully joined nearly two dozen UT students to unload bullets into targets at Central Texas Gun Works on Sunday.

The political communications sophomore said she was glad her group, College Republicans, hosted a shooting range social where she could finally satisfy her curiosity with guns.

“I’ve been in love with guns ever since I saw Dirty Harry,” Worke said, referencing the 1971 police film starring Clint Eastwood.

“We invited anyone who was interested,” Lucas said. “I figured that it would be something not only fun but in compliance with our views as well. The vast majority of College Republicans are pro-Second Amendment.”

Central Texas Gun Works facilitated the event for College Republicans and offered guns that varied in size and power, from weapons that some students described as peashooters to 12-guage shotguns with deafening roars.

Petroleum engineering sophomore Daniel Kim, who grew up in Seoul, South Korea, a country where citizens must store private firearms in police stations, said firing one for the first time was exhilarating.

“I’ve always wanted to go hunting or at least experience shooting a gun,” Kim said. “I think it’s one of the most exciting experiences you can have living in America. You know it’s every man’s romance — other than with a girl.”

Richard Zhou, a College Republican and supply chain management sophomore, said he felt ecstatic after firing all the available weapons, particularly the grand finale shotgun. Zhou said he now wants to buy his own firearm since it may be useful for self-defense.

“Not something too extravagant, not like a rifle, probably just two handguns on each side and I’m good,” Zhou said. “It’s important to learn how to defend yourself, and it’s way easier to do that if you have a firearm.”

Aerospace engineering sophomore Nate Carlson, an event attendee who is not a member of the College Republicans, said students who are fearful of firearms should come practice at the shooting range because it will mitigate their apprehensiveness.

“A lot of people are afraid of things they don’t know,” Carlson said. “When you’re afraid of something, it’s usually because you don’t have a full understanding of it. I feel like campus carry is a very overblown issue.”

However, Kim, who is also Carlson’s fraternity brother, disagreed and said that while the shooting range is an appropriate venue to   carry firearms, campus is not.

“I strongly disagree with concealed carry on campus,” Kim said. “A lot of people are young. They have to be protected by law enforcement, not by some individual carrying a handgun. I don’t want people to have those kind of authorities over me or my future kids if they go to university.”