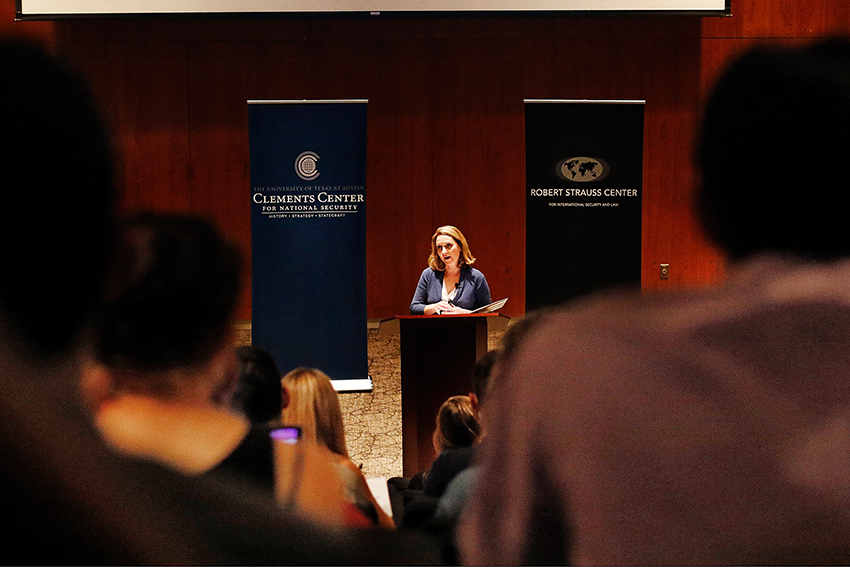 Kathleen Hicks said being a member of a Washington D.C. bipartisan think tank can feel like being a lone polar bear stuck on an iceberg.

“We are all alone in a sea of partisanship,” Hicks said. “As somebody who works on foreign policy where the bipartisanship consensus has been strongest in many cases, this is particularly troublesome.”

Hicks, director, senior vice president and Henry A. Kissinger Chair of the International Security Program at the Center for Strategic and International Studies, led a talk Thursday on “Shifting Global Trends and the Collapse of the American Foreign Policy Consensus.”

“It’s great to be a superpower, but we have some challenges, and we have to recognize that,” Hicks said.

“These kinds of talks are on the nose of what’s happening in politics these days,” Madhan said.

“A lack of cohesiveness is a big problem,” said Megan Soetaert, international studies and French sophomore. “The United States just has a tendency to swing toward our own interests.”

Madhan agreed with the sentiment and said the U.S. is going through a lot of populist movements.

“People are turning inwards and trying to find their own national identity,” Madhan said. “Everyone is coming to terms with accepting that we’re going to start living in this globalized world.”

Hicks said she is more hopeful about the American consensus on foreign policy and feels most Americans know globalization is key to the future.

Despite this, Hicks said there are roadblocks to America’s improvement in obtaining a more international foreign policy.

“The disfunction we have in our politics at home, the fact that we cannot solve our tensions along partisan and other lines, is showing the rest of the world that our system is not a particularly effective one,” Hicks said.

Before concluding, Hicks shared a photo of a family of polar bears.

“For all I know, these polar bears are about to eat each other alive, but they are all together, and I think that’s what the American spirit is about,” Hicks said. “We may be different parties, but we should be working on this enterprise together.”