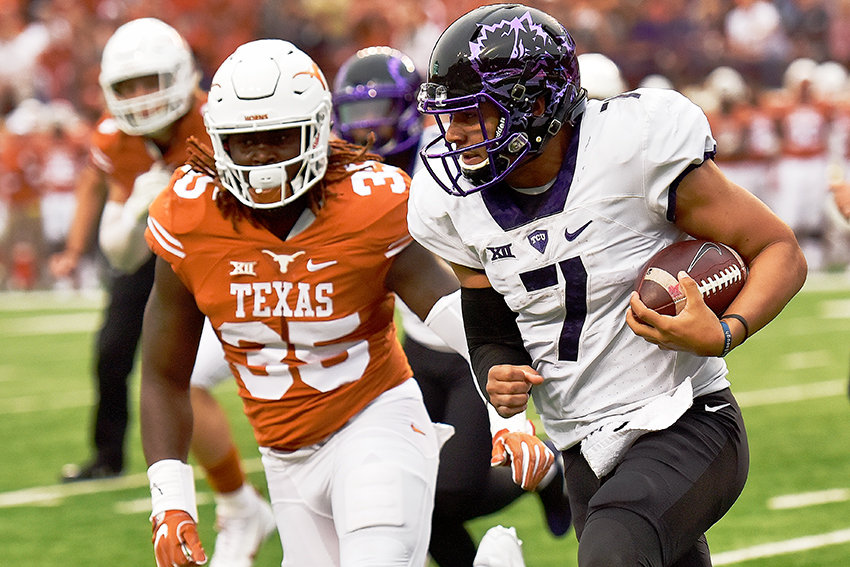 While the Longhorns and Iowa State had a bye week this past Saturday, eight other Big 12 teams suited up for both conference and non-conference matchups. Here’s how they shaped up.

The Cowboys gave people across the country plenty to talk about when they finished non-conference play last week 3-0 after scoring a total of 162 points in those three games. Despite riding three stellar performances from Heisman candidate quarterback Mason Rudolph, the Cowboys’ high-octane offense failed to keep up with TCU. And the Horned Frogs, who went into Stillwater with something to prove after being blown out at home by the Cowboys last season, got their revenge.

In the Big 12 conference opener, TCU head coach Gary Patterson worked to pull off a wild 44-31 victory over the Cowboys despite losing the turnover battle four to one. Running back Darius Anderson carried the TCU offense for large stretches of the second half, rattling off 160 yards and three touchdowns in the win. Following Saturday’s victory, TCU shot up to No. 9 in the AP Poll, knocking Oklahoma State back to No. 15.

A gaping hole formed at the quarterback position in Lubbock after the Kansas City Chiefs selected former Texas Tech quarterback Patrick Mahomes III as its No. 10 pick in the 2017 NFL Draft. But through three games this season, head coach Kliff Kingsbury seems to have found the newest gunslinger to lead the Red Raiders’ vertical air raid offense: senior quarterback Nic Shimonek.

The Texas Tech signal caller snapped Houston’s 16-game winning streak at home with his effort on Saturday, throwing for two touchdowns in a 27-24 victory. Three games into the season and the senior has thrown for 1,248 yards and 11 touchdowns.

Oklahoma traveled to Waco to take on a winless Baylor squad in its first conference matchup of the year on Saturday, where it quickly fell into an unexpected back and forth affair with the Bears. Despite losing to Liberty and UTSA to open the season, Baylor kept things close, losing to the No. 3 Sooners 49-41. Baylor’s quarterback Zach Smith shined, throwing for 463 yards and four touchdowns.

With the victory, Oklahoma extended its Big 12 win streak to 17 games. They’ll next take the field on Oct. 7 for a date with Iowa State at home.