Jackson-Jones’ battles go beyond the hardwood 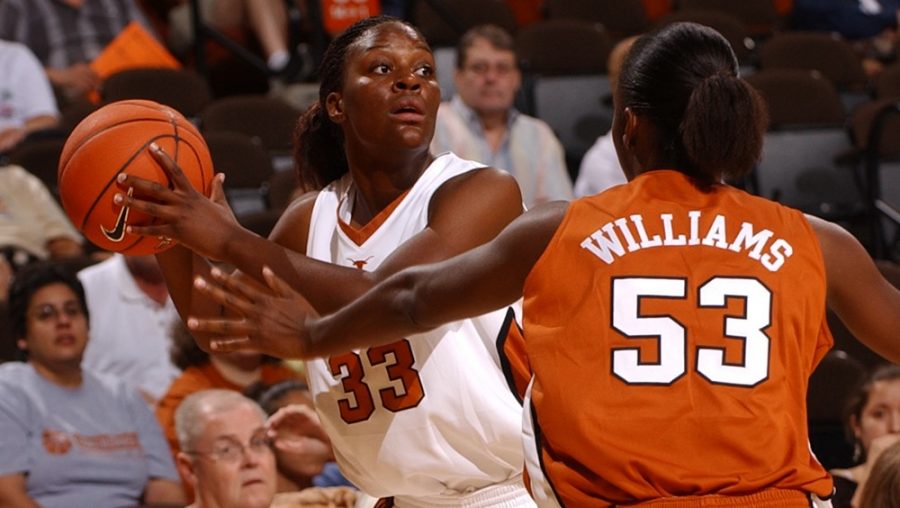 In a conversation with her trainer, former Longhorn Tiffany Jackson-Jones was adamant that she needed to continue her routine.

“If I’m not calling you, I need you to call me,” Jackson-Jones told her coach.

Jackson-Jones was diagnosed with breast cancer in September 2015. She was preparing to sit out the 2016 WNBA season to undergo a regimen of chemotherapy, but she was determined to prove it wouldn’t be a death sentence for her life or her career.

“It was probably one of the most difficult things I had to go through,” Jackson-Jones said. “I had an extremely good support system around me, which made it a little easier.”

The Longhorns’ women’s basketball program made up a large portion of her support group.

“I probably came to Austin more than I have in a long time while I was going through the process,” Jackson-Jones said. “I was constantly down there, just being with the girls and with the coaching staff and learning as much as I could.”

Aston was an assistant coach at Texas while Jackson-Jones was a Longhorn. She played a major part in Jackson-Jones’ recruitment and remains one of her biggest fans. As for Thompson, she was one of Jackson-Jones’ favorite players growing up. The two even faced off in the WNBA on numerous occasions, starting when Jackson-Jones was drafted by the New York Liberty in 2007.

The coaches were shocked when they learned of Jackson-Jones’ diagnosis. But they say they knew she had the resiliency to make it through her cancer treatment.

“I had no doubt in my mind that she was going to beat it,” Aston said. “It’s just the kind of person she is.”

During her time off, Jackson-Jones refused to skip a day of training despite the physical and emotional toll chemotherapy took on her. The bit of comfort that Jackson-Jones received from her support system went a long way.

“I think we treated her normal,” Thompson said. “Sometimes when people treat you like you’re sick, then you feel sick. When we saw her we smiled, we hugged her, we did all the things that we would do pre- or post- her journey.”

Jackson-Jones went into remission in May 2016 and she returned to the sport. In February 2017, she signed with the Los Angeles Sparks.

Jackson-Jones said choosing the Sparks was an easy decision based on her experience playing against them and the team’s record of success. Los Angeles won the WNBA championship last season while she was still recovering. This year, Jackson-Jones appeared in 26 games, helping the Sparks earn the No. 2 seed in the Western Conference.

“My role on this team is to help people get better, regardless of what that is,” Jackson-Jones said. “My role is really whatever the team needs me to do.”

The Sparks swept the Phoenix Mercury 3-0 in the semifinals of the playoffs. On Sunday, they won the first game of the WNBA Finals against the Minnesota Lynx, 85-84. It was Jackson-Jones’ first time on the championship stage.

“Basketball and my son are probably the two things that kept me going,” she said. “I think (reaching the Finals is) just a testament of my career and everything I’ve been through and how hard I’ve worked.”

Game two tips off on Tuesday at 7 p.m.