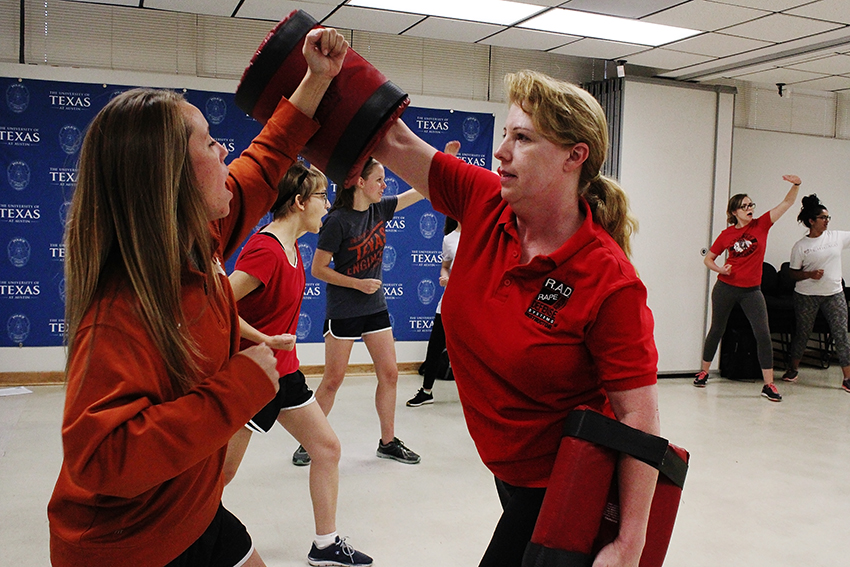 The Rape Aggression Defense Systems program, known as RAD, teaches women how to defend themselves against abduction and assault through physical techniques. The course is offered free of charge to UT students, faculty and staff at UTPD’s office from 5 p.m. to 9 p.m. through Wednesday. RAD started at UT in 2001 after UTPD received a grant from Voices Against Violence.

Lt. Laura Davis, one of the RAD instructors, said the purpose of the program is to prepare people for different scenarios.

“We want to give you a broad aspect of what tools are available to you at all times,” Davis said. “There are things like, ‘What if someone grabs you from behind? What if someone trips you? If you’re wearing heels, how is that going to change the way you run or fight?’ This programs gives you the opportunity to see how there may be challenges you might need to think about.”

One participant, elementary education junior Sarah Stluka said she thinks self-defense would be a valuable skill for when she is alone on campus at night.

“For me, if somebody comes from behind I wouldn’t know what to do, so hopefully I can learn that in this class,” Stluka said.

Instructors allow attendees to be in control of their level of participation, to practice self-care and to maintain confidentiality of anything shared among them, including some of the techniques they learn.

During the sessions, instructors videotape participants practicing physical techniques and go over them. Anita Wright, UTPD administrative assistant and RAD instructor, said it is empowering for RAD participants to see their skills improve.

“The main thing is for them to get away from their assailant,” Wright said. “So when they see themselves do it over and over again, then it’s in their mind that ‘Okay, I can do this instead of just freezing.’”

Similarly, Davis said she noticed program participants in the past were more confident during the third session of the program than they were in the first session.

“The first night they’re quiet and by the third night they’re a totally different person,” Davis said. “When they see themselves on the screen and see how awesome they were, they realize, ‘I’m more powerful than I thought.’”