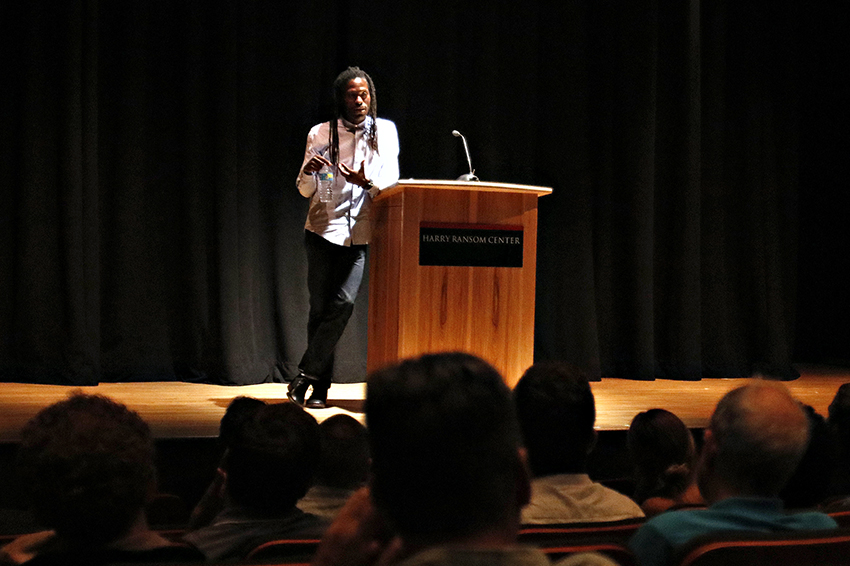 Five hours before he was slotted to take stage, Roger Reeves was in his cluttered, unpainted office scribbling an idea for a poem in the margins of a book. He had no idea what he was going to read that night.

“I want to read new stuff,” Reeves said. “I want to put into the air the element of risk.”

Reeves, award-winning poet and associate poetry writing professor, gave his inaugural reading at the Harry Ransom Center on Tuesday. The event was co-presented by the Department of English and the New Writers Project.

“The difference between going to a concert and listening to an album online is that you actually see a bit of what it is to make a song,” Reeves said. “You go to a poetry reading because you want to go to a good concert.”

Reeves returned this semester to teach as an alumnus, having attended UT for his Masters of Fine Arts and doctorate. When the Harry Ransom Center approached him a few months ago about reading his poetry, Reeves said he was thrilled.

Lisa Olstein, director of the New Writers Project, introduced Reeves. She said she admires his mastery of language and lyricism and his ability to tackle nuanced political issues.

“I think (that) is always why I leave Roger’s poems different than I entered them,” Olstein said.

English graduate student Calaandra Mazcuri said she intends to take Reeves’ poetry class next semester, and she appreciates his ideas about what it means to be a writer.

“Being a poet is not an identity,” Mazcuri said. “It’s always good to be reminded that poets are people who work really hard every day.”

The theater was filled with students, adults and even children, but everyone fell silent when Reeves walked onto the stage singing James Weldon Johnson’s “Lift Every Voice and Sing.” He said the song is considered an anthem for the African-American community.

“The reason I sang that is we’re having all this debate about national anthems,” Reeves said. “I wanted to put these two songs into conversation.”

Reeves selected some old poems and some new ones to read. In particular, he said he chose to perform poems tied to his time as a student in Austin as a way to celebrate his return.

“Sometimes you feel like Obed a little bit,” Reeves said, referring to a character in the Bible. “You get thrown out, asking, ‘Can I come back home?’ It’s nice to be back.”