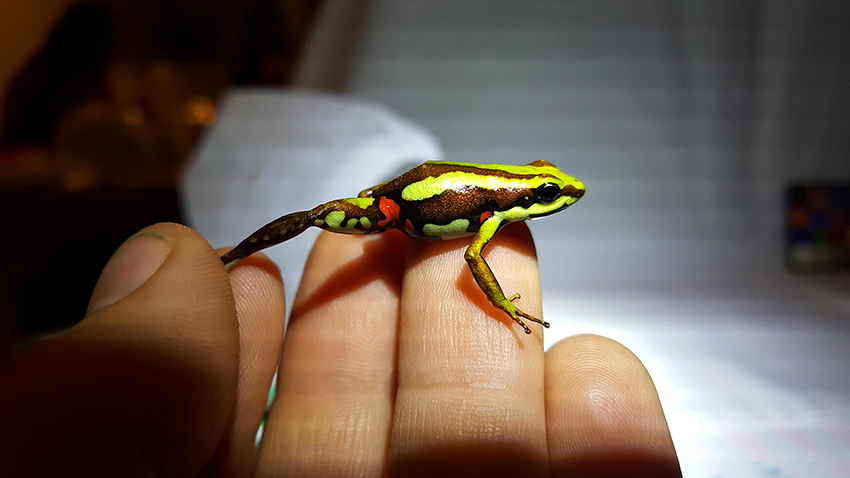 The ability of poison frogs to resist their own lethal toxins is genetically evolved, according to UT researchers. The researchers determined that mutation of three amino acids produces toxin-resistance in frog receptors. Their research was published on Aug. 21 in Science Magazine.

In 2016, co-first author Rebecca Tarvin identified five variant amino acids in poison frogs with the potential to induce toxin resistance to chemical defense. According to Tarvin, the new research shifts from the computation models to a more direct study of the frogs’ physiology.

“We wanted to do the physiology to really know for sure (whether) these changes provide resistance or not,” Tarvin said.

The researchers found that only one amino acid replacement is required to provide resistance to epibatidine, the toxic defense that Epipedobates and Ameerega poison frogs utilise.

“The problem is it also comes at a cost,” co-first author Cecilia Borghese said.

“They normalize the response to acetylcholine without affecting the decreased response to epibatidine,” Borghese said. “It’s a way of fixing the receptor.”

According to Tarvin, among the thousand chemical defenses that poison frogs can exhibit, only two are recognized as lethal: batrachotoxin and epibatidine. The UT study focused on epibatidine resistance.

A study conducted at State University of New York (SUNY) investigated batrachotoxin. SUNY researchers drew from the five amino acid variants identified in Tarvin’s 2016 study and determined that a single amino acid replacement is responsible for batrachotoxin resistance. Unlike the epibatidine study, additional amino acid replacements were not required to preserve receptor function, according to SUNY co-author Sho-Ya Wang.

“The major difference in toxin auto-resistance of these two studies is that epibatidine targets the acetylcholine receptor (ligand-gated channel) whereas batrachotoxin targets the voltage-gated sodium channel,” Wang said.

The different mechanisms by which the toxins interact with the receptors explain the variation in the need for additional amino acid replacements, according to Tarvin.

Another distinction, not only from the SUNY study, but also from other studies on this topic, is that the UT researchers induced changes in both human and frog receptors.

According to Tarvin, this “complementary mirroring” is a unique approach to understanding how the mutation changes the receptor. This research could offer important insight into drug development, according to Borghese.

“Nicotinic receptors are involved in processes like memory and learning, and they’re also targets when it comes to Alzheimer’s disease and treatments for pain,” said Borghese. “So we hope this will give more insight on how this interaction happens, and in turn lead to better drug design.”

Tarvin said that understanding how organisms coevolve with toxins can also lead to additional insight into how organisms adapt to highly toxic or polluted environments.

“These types of discoveries wouldn’t be possible if we didn’t preserve our biodiversity,” Tarvin said. “More than 30 percent of (frogs) are in danger of extinction.”

According to Tarvin, habitat degradation as a result of human development serves as a major threat to these species.

“Evolution has basically been running these very long experiments for a very long time,” Borghese said. “If we don’t get the chance to study them, we’re going to lose a lot of insight.”