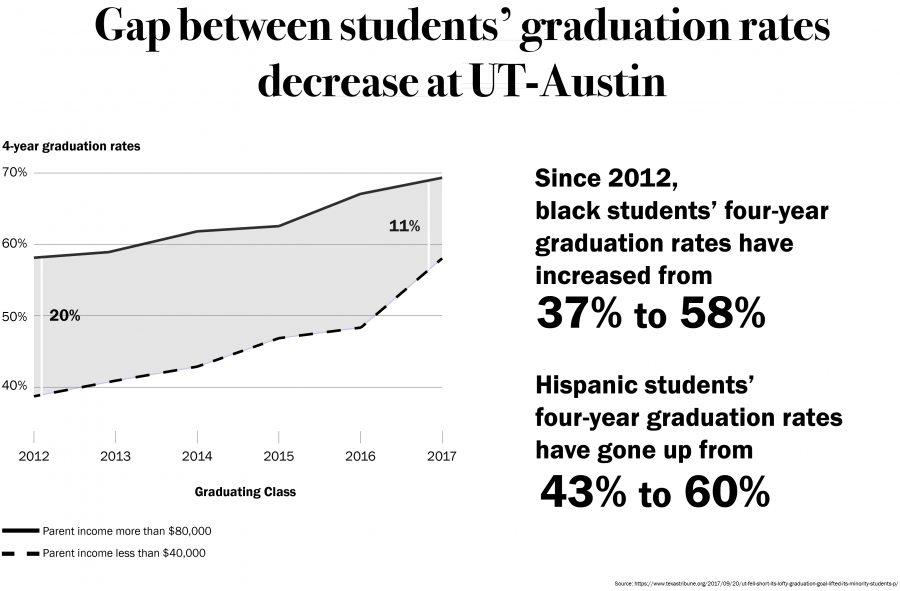 In 2012, then-president of UT William Powers established a lofty goal: Raise the flagship campus’s four-year graduation rate to 70 percent in five years. Back then, the four-year graduation rate was only 52 percent — still the highest for a Texas public university, but lagging far behind national top-tier institutions. While last week’s report — the one that should have hit the 70 percent mark— came up short at 65.7 percent, the last thing we should do is treat this as a failure.

Around the time UT set its sights at 70 percent, Texas public universities were getting national criticism for their unimpressive graduation rates — with one Washington think tank going as far as calling our universities “dropout factories.” Cynics may argue that UT’s motivations for increasing graduation rates lie primarily in boosting the University’s national profile, but because of a clear and intelligent strategy by university officials, the impact is much farther-reaching than simply improving our ranking on the U.S. News & World Report.

Arguably the cornerstone of the University’s 70 percent initiative has been the Student Success Initiatives launched in 2013. Through programs created through the Student Success Initiatives, such as the University Leadership Network and 360 Connections, administrators have meaningfully improved retention of “at-risk” freshmen through both monetary aid and community support.

The success of these programs cannot be understated. African American and Hispanic Longhorns, who in 2012 graduated 20 percent less often than their white and Asian peers, have halved that gap. Students whose parents earn less than $40,000 a year now see four-year graduation rates at 58 percent — 20 percent higher than they were in 2012. Our Student Success Initiatives have been nationally lauded because they work. Through bold and effective policy, the same naysayers that once doubted Texas universities now view UT as a role model for increasing graduation rates.

UT’s success story is one that deserves to be replicated at campuses around the state and country alike. In today’s economy, a college education is key to prosperity. Without a college degree, a child born into a family in the lowest quintile of income earners has a nearly 50/50 chance of staying there in adulthood. With a college degree, that same child is more likely to be in the highest quintile of income earners than the lowest as an adult. Low income and minority students — the same students UT has reached out to over the past five years — stand the most to gain from initiatives to expand resources and increase graduation rates. Not only should we as a university continue to provide tools for these students to succeed and climb the social ladder, but universities nationwide should as well.

In a society where social mobility has been made increasingly harder, in part because of the rising price of college education, UT’s progress and success in lifting the graduation rates of low-income and historically disadvantaged students is incredibly valuable. The University of Texas at Austin is setting a standard in the state of Texas that our other public universities should strive to replicate — not for the sake of climbing college rankings, but for the sake of their students.