Texas soars in polls ahead of second week of conference play 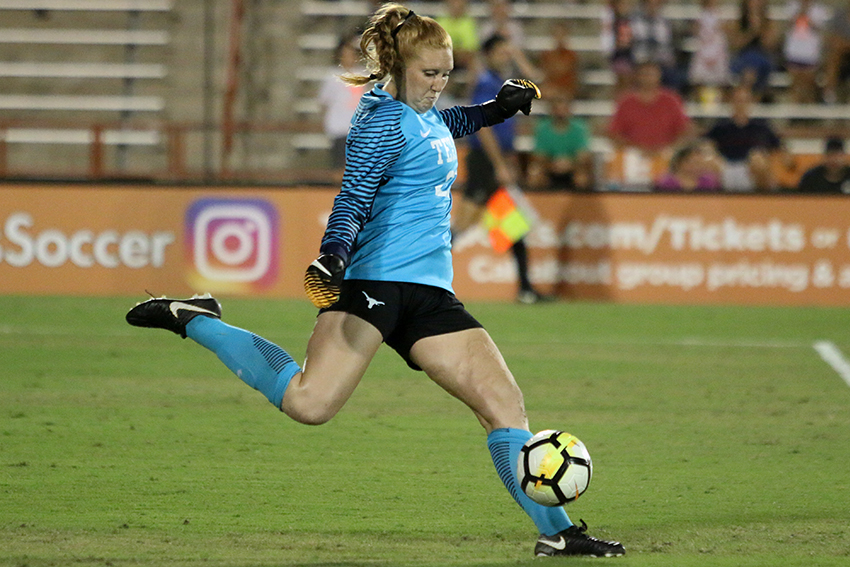 The accolades continue to pile up for the Longhorns as the team leapt up the rankings to break into the top 10 across all four major polls following Sunday’s upset over the then-No. 5 Mountaineers. Texas is now just one win away from tying the program record of 11 straight victories, set during the 2001 season.

Numerous players were lauded along with the team for their individual successes over the weekend. The team swept the weekly Big 12 Conference awards – only the fifth program to do so – marking the third straight week in which a Texas player has earned a Conference Play of the Week nod. Sophomore forward Cyera Hintzen, sophomore goalie Nicole Curry and freshman midfielder Haley Berg were chosen as the Big 12 Offensive, Defensive and Freshman Players of the Week, respectively.

“Atu Mshana’s soccer IQ is through the roof,” head coach Angela Kelly said. Mshana has never left the pitch during her 28 career starts, playing all 2,584 available minutes, while leading the Longhorns to a conference-best seven shutouts this season.

The waterfall of awards reflects just how unprecedented Sunday’s win over the Mountaineers’ was. With arms full of plaques and medals, the Longhorns now turn their attention to the coming slate of conference games.

“The #RAMPED mentality is so embedded in our players,” Curry said. “We’re excited to keep moving forward and keep learning.”

On Friday, Texas hosts conference rival Texas Tech, who enters coming off of a 1-1 draw with Kansas on Sunday afternoon. The 8–2–1 Red Raiders pose the biggest conference threat to the Longhorns outside of TCU and the Mountaineers.

From there, Texas heads out of state for its first Big 12 road match, facing off against Oklahoma. After last week’s start, these two opponents provide the Longhorns the chance to cement themselves as the best in the conference. Despite the relatively weaker competition compared to the start of conference play, Texas can’t afford any lapses if it hopes to remain atop the standings.

“We’re continuing to put in the work,” Kelly said. “It’s only just begun. We’re still taking it one game at a time. The most important game after you have a big time win is the next one.”