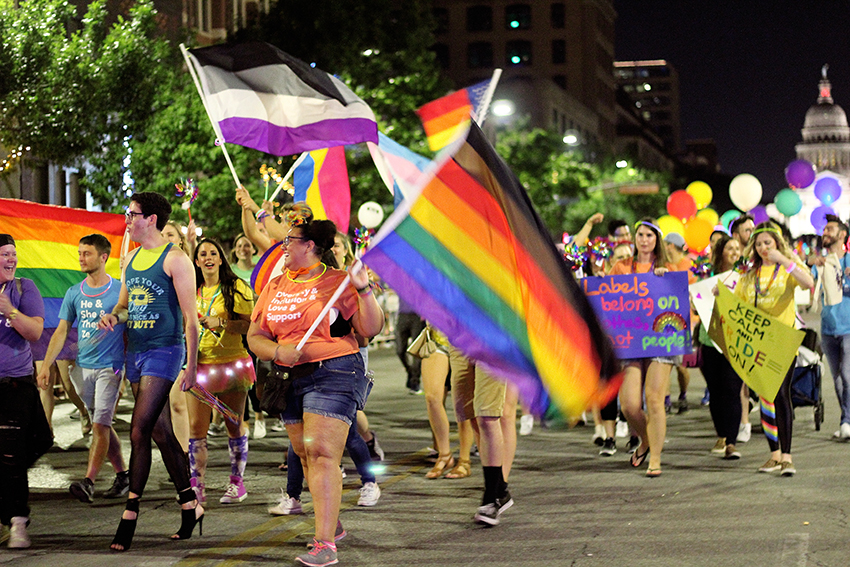 Thousands of people lined the streets of downtown Austin on Saturday night to celebrate the LGBTQ community after Hurricane Harvey forced Austin Pride to reschedule its annual Pride Parade a month ago.

For some, this year’s parade took on a new meaning following the defeat of Senate Bill 6, informally known as the “bathroom bill.” SB 6, also known as the Texas Privacy Act, was introduced during the 2017 legislative session. If passed, the bill would have required Texans to use the bathroom corresponding to the sex listed on their birth certificates.

Proponents of the bill hailed it as a protective measure to ensure the safety of women’s bathrooms. Those who stood against it, including Texas Speaker of the House Joe Straus, R-San Antonio, said it was unnecessary and would only damage the lives of transgender Texans.

With the bill in the rearview mirror, attendees said this year’s parade in Austin stood as a reminder of the LGBTQ community’s growing strength against adversity.

“Being here, surrounded by all the rainbow, it makes me feel amazing,” said Auston Carlson, health and society freshman and first-time Pride attendee. “I know the bill wasn’t defeated for exactly the right reasons. I know there was economic backlash, and that was probably the majority of the reason why it got defeated, but the fact that it did get defeated was just amazing. It feels like a triumph for the LGBTQ community — specifically trans people.”

CEOs of dozens of companies, including AT&T, Southwest Airlines and Texas Instruments, banded together to urge lawmakers to derail the bill or risk tarnishing the state’s economy. In the waning days of the regular session, Straus refused to give the bill a committee hearing, effectively killing the bill.

“This is the right thing to do in order to protect our economy from billions of dollars in losses and more importantly to protect the safety of some very vulnerable young Texans,” Straus said in a news conference three days before the legislative session ended. “There is no reason to make a tragic and a costly mistake.”

The bill, and other versions of it, died during the regular session in the spring. The summer’s special session attempted to revive the bathroom bill, but Straus’ opposition continued, and the bill was doomed.

Mary Blanchard, design freshman and Pride attendee, said she was mortified as she watched the bill go through the legislature last year. It was unbearable to listen to her transgender friends’ fears of the bill, Blanchard said.

“It was really scary. I have a lot of trans friends, and I didn’t want anyone to get hurt or feel like they didn’t belong when they’ve come so far,” Blanchard said. “It was really disheartening because they had fought so much, and they were finally so proud of who they are. It wasn’t right to make them feel closeted again, being forced back.”

With the bill defeated, Blanchard said this year’s Pride Parade meant more to her. Blanchard said even as new obstacles cropped up, Pride stood as a reminder that no hardship could truly stop the community from fighting for their rights.

“We’re even stronger than we were before, so (there’s) definitely a lot to look forward to,” Blanchard said. “We definitely are kind of like a phoenix from the ashes. There’s no bringing us down.”